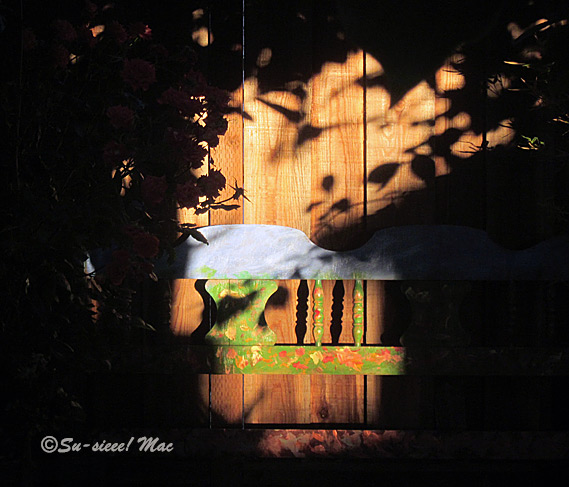 1. Next month the U.S. Post Office will be selling forever stamps that celebrate Hip Hop. According to the USPS website, the sheet of stamps features rapping, break dancing, DJing, and graffiti art. I don't know what floors me more -- Hip Hop commemorative stamps or that the first kids into hip hop are now in their 40s and 50s?

2. Our local library has been closed since early March due to the coronavirus pandemic. This month, the librarians decided that we, patrons, can check out books online for pick up. The pick-up process today was easy-peasy, even though I forgot to bring my library card. Nine new books to entertain me. Yippieeee! 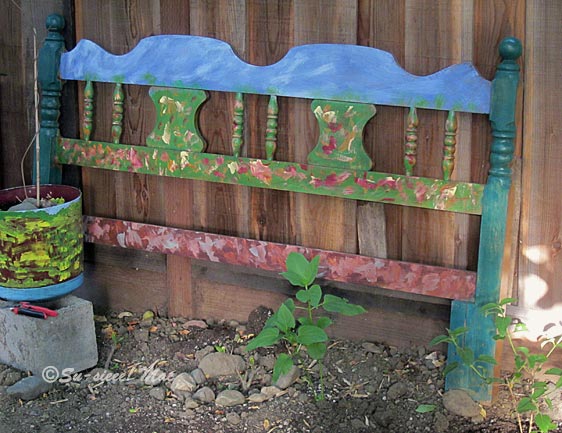 3. A few weeks ago, the Husband painted this headboard, full of delight and whimsy, perfect for the Banana Room, once known as the Shady Room. The banana plants look to be coming back, and the bamboo, gardenia, and wongo-wongo plants seem to relish their move there. I also replanted a camelia shrub by the headboard. Does that all sound subtropical?

4. A bittermelon leaf a day keeps the doctor away. In my book, that's how the proverb goes.
Bittermelon lowers blood sugar, according to some health experts. They may be right. I ate a lot of sweets when I was a kid. Back then, Mama added bittermelon leaves and fruit to her dinengdeng (vegetable mishmash), pinakbet (eggplant stew), and chicken soup. Yummmm.

5. Have I already told you that Mama's bittermelon seeds sprouted?  I planted the five-year-old (or older) seeds in a 5-gallon white plastic bucket so Hurrah for them! The Husband built me a tripod to use for a trellis, which I need to string twine around pronto. 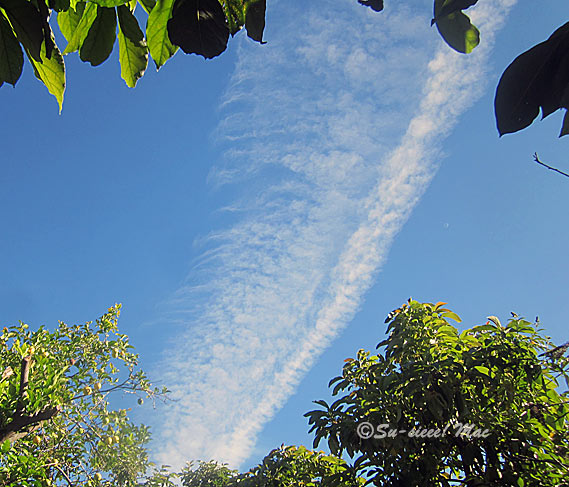 6. This morning, I watched a spinal cord inch eastward across the sky. By the time I thought to click my camera at the phenomena, the cloud was into another transformation. So I thought. When I looked at the photo on the computer, there it was—the spinal cord. And, guiding it along, on the left, was a figure. So it looked to me. Can you see it? Her head starts about one-third from the top of the photo.

7. I've become more relaxed about going into the stores. Still only food shopping for us and Missy Molly by Golly though. I prefer to shop when the stores first open but I'm getting to where I can wait until midmorning. So different from when I was young and single living the Mary Richards life in the Big City.  I got a kick out of doing my grocery shopping after midnight at the 24-hour supermarket with its own parking garage.

8. Oh my gosh the things you can discover with the right bunch of keywords. Last night I found a website that provided information about total lunar eclipses visible from a given town between 1980 and 1996. It also gave me facts for a total lunar eclipse that took place on  July 15, 1935, as well as showed an animation of its path. Hmmm, a story is a brewing in my head. 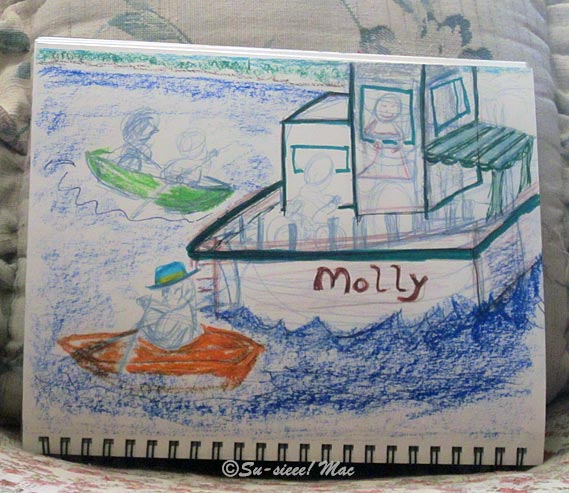 9. Again, when I was young and single, one of my fantasies was to raft the Mississippi River, from as close to its head as possible and all the meandering way to the Louisiana Bayou. It was recently that I remembered this daydream while chatting with Jeana of Ched Curtain on Facebook. She had a similar dream to canoe a different river around the same time. We got to imagining ourselves doing a river trip today. I got so excited this drawing started coming out of me.

10. Two thoughts have flown by because I tried to write "perfect" sentences rather than slap dashing my thoughts down to edit later. Written words are my whole life. Actually, not literally. I accomplished what Mama and Daddy wanted for me: To have a good life in this country to which they chose to immigrate for the opportunities for their children. 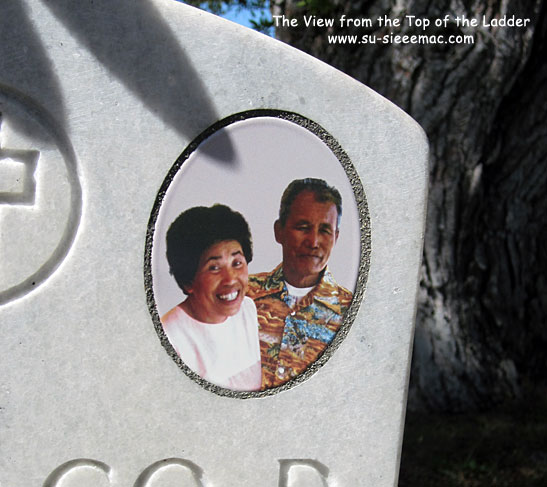 11. Daddy went to second grade in the Philippines, which, back then, was a U.S. territory. He quit school because his father died and his mother had 12 children to raise. Excuse me if I've told this story before. I love this story. Daddy was between nine and 11 years old at the time. He and his oldest brother and sister had the task to plow the field. So Daddy and his older brother hitched themselves to the plow. While they struggled forward pulling the plow, their sister steered and pushed it.

12. Mama left school, too, when her father died. She had five brothers. While her three older brothers went to school and worked, Mama cared for her two younger brothers. Mama was nine or 10. When she was about 16, her mom told her she could go back to school. Mama didn't. "Too embarrassing," she said. If she had opted to go back to school, somewhere during her life, I'm sure she would've soared her way to a doctorate in engineering or biological science. Maybe that happened in a parallel universe. In this universe, despite her lack of formal learning, Mama did quite well for herself.  More stories for other days.

For more lists and likes, check out Thursday 13 and I Like Thursday.

By the way, do you think Molly the pinky-nosed (wild) Cat is eating a leaf or licking her paw? 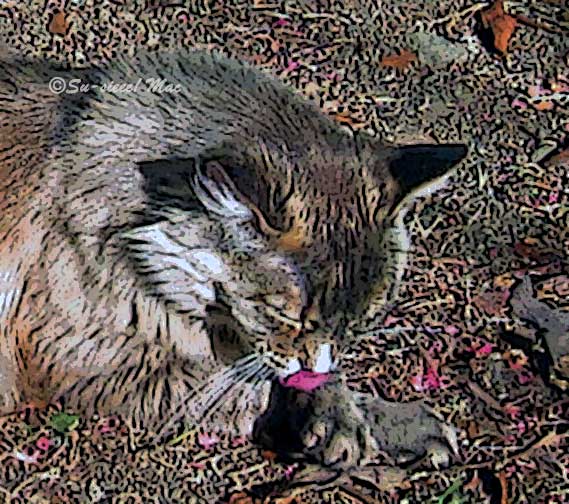