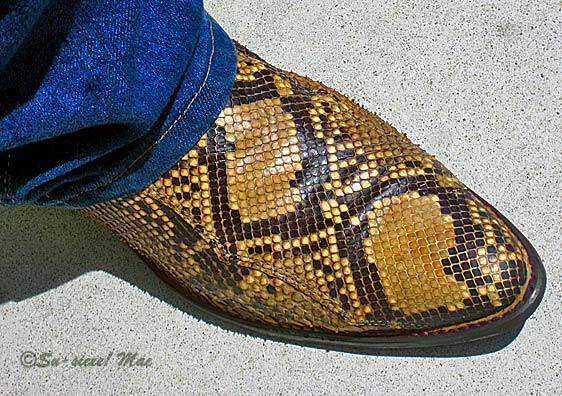 That's the foot of our new acquaintance Steve, a storyteller of a guy, who we met at yesterday's two-buck senior citizen buffet hosted by the local hospital's volunteer group. Steve was wearing python-skin cowboy boots, and was kind enough to let me take a photo of them.  Both the Husband and I wondered if he called his boots Monty, but neither of us asked him. We just thought it.

Ever heard a python snake?

Good old friend Google coughed up a video sound bite of a python.

Its hiss brought to mind of a flushing toilet. The Husband remarked that would be an awful quiet toilet. He thought the python's hiss is more like the sound of spraying water on leaves. Maybe. My second thought was that the python's hiss almost, almost, sounds like ocean waves. Click here if you want to hear a python's hiss. What does it sound like to you?

It's time for All Seasons, a weekly meme hosted by Jesh at Artworks from Jesh St.G. Click here to check out Jesh. For the participants list, click here. Thank you, Jesh!