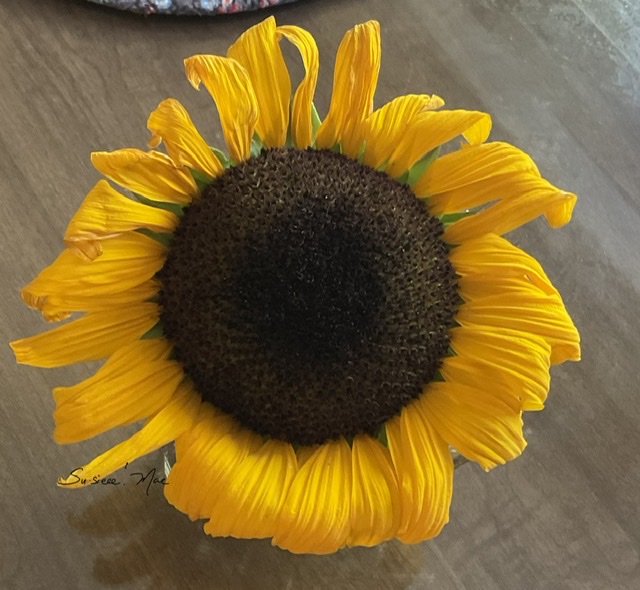 (1) How hot is it? Well, the Husband is wearing a tank shirt and shorts and walking around the house barefoot. I pretty much do that every day, but not him.

(2) It has been seven days of temperatures in the high 90s and triple digits! The iPad won’t charge any further than 80 percent when it’s this hot. If the weather guys are to believed, we’ll feel the last of 100+ degrees today. Knock on wood, cross my fingers. This excessive heat is uncommon for our area. I’m thankful it’s unaccompanied with oppressive humidity.

(3) We’ve managed to get by without the the air conditioner or heading to a cooling center. Doing the old-fashioned practice of closing and opening curtains to the sun and staying inside have made it bearable. It also helps that we have a big shady tree in front and a bunch of fruit trees in the back.

(4) We’re one of the few homes that have mature trees on our street. I wouldn’t be surprised if some neighbors wished we’d remove our trees. Earlier this year, a neighbor sent me an email to deal with rats her daughter saw scrambling in our fruit trees while she was smoking a cigarette in their backyard one night.

(5) The thought of rats in the backyard creeped me out big time. Shudder! Rats and mice are not my friends, but Google is. The day we got the email, we wrapped aluminum around the base of each tree and dumped spicy red pepper flakes around its trunk. We also pruned tree branches away from the fence.

(6) A week or so later, the neighbor sent an apologetic email for sounding so harsh and accusatory that we may have rats. That was nice of her, but I didn’t think she was being mean. We do wonder if her daughter saw rats. It was around midnight after all. It could’ve been birds, voles, or squirrels. A friend pointed out that even if they were rats, they may have been passing through from elsewhere. Anyway, so far, so good. No more reports of rats flying through our trees.

(7) The only rats I see flying around here are the GOP candidates who are MAGA want-to-be’s. One of them is running for our district’s House seat. He published an essay about his Latino culture not believing in being “woke”. Where does he get such an idea? He calls himself a Christian. How can you be one and not be woke?

(8) He’ll be a useless representative for the Husband and me, should he get elected. He is currently our useless district representative on the county board. I say useless because he has shown to ignore constituents who don’t have his same beliefs. Ugh.

(9) On a fun note, I registered 16 entries, many to be determined, for next month’s county fair. Yeah, I tend to get over ambitious. I figure whatever I don’t finish, I can submit next year, if I remember. 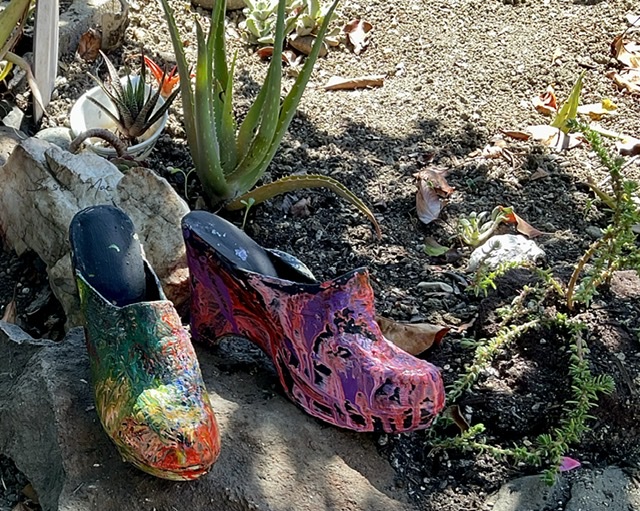 (10) Most of the entries are for the adult crafts department. I’ve already got the painted tile and platform shoes done, and I know I want to make a beaded sun catcher, a clothespin wreath, and a steampunk hat out of duct tape. I  also plan on turning a juicer into a garden art robot and decoupage a rock or two.

(11) I decided to enter one one of my paintings. Either this or this.

(12) The other day, the Husband and I were sitting in the dark cool of the living room, each in our own world wandering around the Internet. “Turn up the music,” I said. “What music?” asked he.  I thought I heard Santana singing “Oye Come Va” very faintly on his iPad, but he was reading an article. No music at all. So, I decided to turn moonaliceradio.com on my iPad. Guess what song came on while we were talking. Yep, “Oye Come Va”! Spooky, yeah?

(13) It’s 106 degrees outside right now! The iPad has stopped charging.