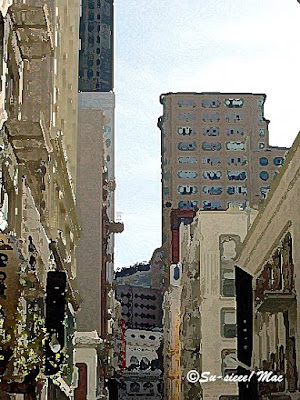 For awhile, I lived longer in San Francisco than in Hollister where I was born and raised. I moved away at 19 years old to study at San Francisco State University. A couple of times, I moved back to Hollister for a few months. The first time I couldn’t handle being on my own, and the second time it was because I took the concept of being a good daughter too seriously. When I realized my parents were essentially okay about me having a Mary Tyler Moore single girl life in the big city, off to San Francisco I scrambled to live and work thereabouts for another 24 years. During those 30 years, I moved 13 times.

In San Francisco, I had 11 different addresses, all rentals:

When the Husband and I decided to live together, we moved to El Cerrito in the East Bay. We rented a cute funky house on Gladys Avenue (12)that had a view of the San Francisco skyline. A few years later, we moved to Bay View Farm Road (13)in Pinole, the town where the Husband grew up.

When Mama was feeling weaky-weaky (as she liked to say) at 82, which by then she had been living alone for 21 years, the Husband and I decided to move in with her. Relatives lived across the street, but their idea of caring for her was to call me when Mama was being her feisty self. (They eventually moved away to greener pastures, I hope,to the relief of all.) Come this August, the Husband and I will have been living in Hollister for 19 years. What comes next? As Doris Day say, que sera sera.

Thursday means Thursday 13. Please, have a look at what others are sharing. Cheers!