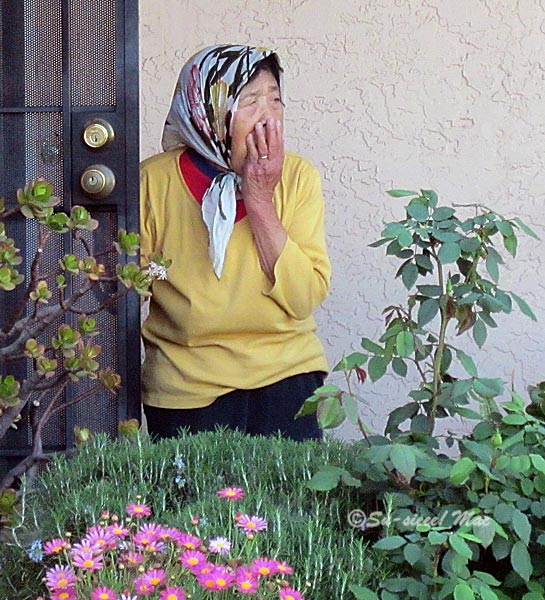 While looking for a photo in my digital archives, I found the above picture of Mama that I took in March 2014. Mama was 92 years old. I wonder what she was looking at that she reacted so.

Two mornings ago I was clearing out the stuff under Mama's once-upon-a-time bathroom sink and found a crisp newspaper sheet neatly folded into a rectangle the size of my hand. Unfolding it got me weepy but I didn't cry. Not until today, this moment.

At first, I thought the folded paper probably held snippets of Mama's hair (she cut her own hair, and very well, too.) that she had fancifully wrapped in newspaper and forgot to throw away.

There was no hair.

Okay, then most likely she saved the newspaper because of an article that quoted the Brother who had been a vice principal at the high school. Nope, the newspaper was dated two or three years after his once-upon-a-time there. The four pages were full of advertisements and one long article about President Obama. Had she kept it for the ads or for the story?

Mama thought highly of President Obama and thought it was a shame the way he was treated by some people. Mama liked presidents who helped the ordinary people. President FDR was big in her book as was President LBJ.

Mama would've been disgusted of trump's actions and behaviors. Also horrified, anxious, and frightened, but yet determined not to be trampled by trump and his gang. Mama looked fragile, but she was a toughie. After all, she had lived through World War II in the Philippines. How many of us can stay still and silent most of the day and night, every day for several years? Some of us can't even wear a mask and forego seeing family members on holidays for the welfare of all.

Mama would've shook her head at the senseless mob who stormed and defaced the Capitol Building. She would've been sad about those individuals' humanity but she wouldn't have excused them for their sins. Mama would have also blamed their parents for not knowing how to discipline them when they were children. That was Mama.