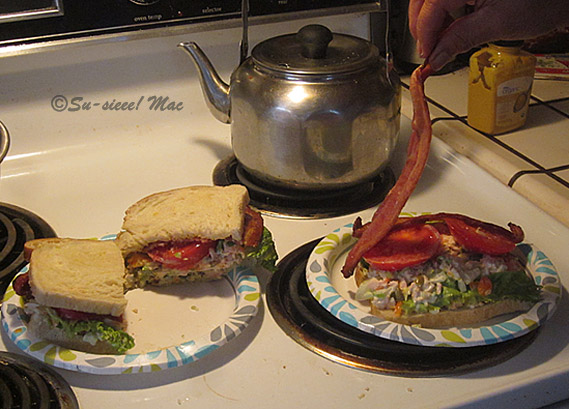 "What?" responded the waitress.

"Tuna BLT," said he again while some of us checked the menu again. It turned out D merged the tuna melt and the BLT together in his head, at which the waitress relaxed, then said they don't substitute. Oh well. D ended asking for the BLT.

The Husband and I were so enamored with the idea of a tuna BLT, I concocted sandwiches for us a week later.

Ingredients
• 2 slices of barely toasted sourdough bread
• Mustard
• 3 strips of bacon (which I cooked in the toaster oven)
• 2 tomato slices
• 2 or 3 lettuce leaves (we had red lettuce in the fridge)
• Tuna filling: one can of tuna mixed with minced celery, onion, garlic, orange bell pepper, pickle, pumpkin seeds, mayonnaise, and creamed horseradish.

The Husband and I totally would have a tuna BLT again. I might even make a melted tuna BLT, with less bacon since there's the addition of cheese. Mmmmm.