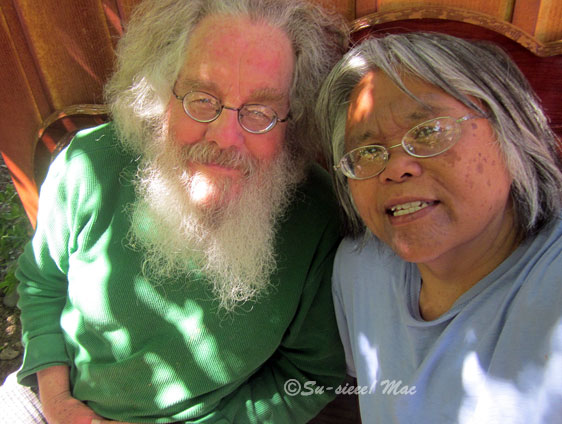 "Would you move a jade plant for me sometime today?" I asked the Husband at breakfast this morning. "It's too heavy for me."

"Maybe it's too heavy for me," he said. Was he being funny? I wondered.

"I don't think so. It's heavy, but not too heavy." The Husband said nothing, merely looked at me.  I continued. "I could handle it, hmpfh,  if it weren't for my knees." Damn knees.

Several hours later, a rustling from the front yard broke into my concentration of whatever I was focusing on, then I heard a grunt, a clapping of hands in satisfaction, the squeeking of the front door.

"Do you want the jade plant in the back?" the Husband called up the stairs.

"On the porch. It's heavy. I'm going to get the hand truck."

Oh oh. I needed to find a temporary spot where I could tackle the jade out of its pot without trampling on anything.

"I'm coming downstairs. Let me think about it while you get the hand truck."

Fortunately, I saw the perfect spot just as the Husband wheeled the hand truck around the garage.

"Do you know where you want it?" he asked as he passed by.

"Over there," I said, pointing to the tree.

"Wait," he said, pushing the handtruck beneath the potted jade. "I can't look."

"I was going to tell you where after I said 'Over there.'" Yes, imagine a bit of a gruffy defensive voice.

The Husband bent to put the plant more securely on the handtruck, all the while talking and me answering in my head "but, I..."

The Husband walked backwords with the handtruck. As he turned it around and faced me, I said, "We sound like an old couple bickering. Hahahaha Funny, huh?" The Husband laughed. Hahahahahah.

Nothing like bickering with someone you love and who loves you, no strings attached.

The jade plant? The Husband placed it right where I wanted it: Over there between the tree and that round concrete steppy thing.