Gentle Grousing with Ghandi and Guy 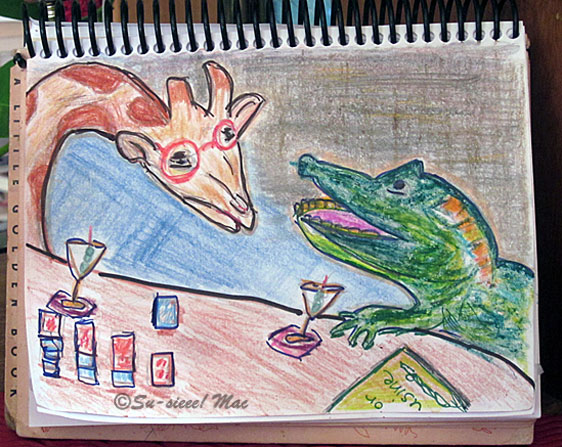 Note: That's the French pronunciation of Guy, said like ghee, a kind of clarified butter.
That said, on with this week's tale for ABC Wednesday.
* * *

"Guy, you'll tear that guide yet," said Ghandi the Gamekeeper, glancing over at Guy A. Gator the Grill Chef, who was whipping not-so-gladly through Gator Cuisine. Ghandi laid a three of hearts down on his game of solitaire.

Guy slapped his hand on a page so vehemently the gin-mill of a bar went silent for a glued second. Guy growled. Or, was it more of a groan? "Look at this!"

Ghandi leaned over the gator's shoulder and read aloud, "The Greatest Gator Gumbo!"

Ghandi grazed Guy's shoulder lightly and gingerly, so the big guy knew that the giraffe was in his corner. "Humans and their follies," said Ghandi.

The two good friends raised their glasses in the air, took a long gulp of martini, gibbered, then sighed.

"How did you set her straight?"

"I presented myself at her table, bowed, and gently stated 'Madame, I am very sorry. It is our policy to forgo the serving of alligator meat. Please choose another dish.' The waiters told me that I turned about with so much grandioso and gravitas, the customer genuflected behind me."

"How was your day, mi trés grand ami, with the games?" Guy asked after Ghandi's last giggle. 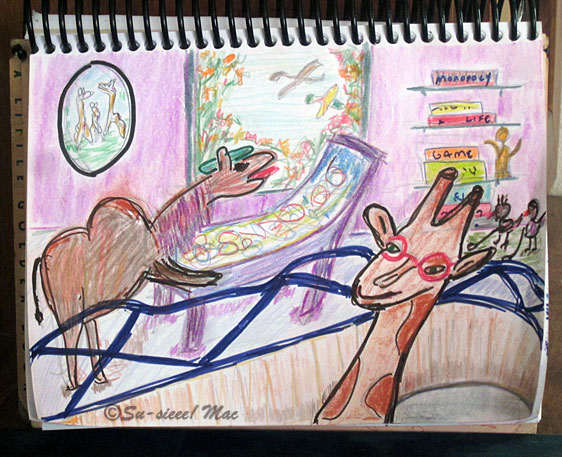 "The grass is no greener on my side. At least today," griped Ghandi. "Bingo and Bubba Byrd spent hours at the putting green on the mezzanine. They were gabbing and gossiping the whole time. After they left, it took forever to scrape their poop off the fake grass."

"A gamekeeper's job is never done, from rising to setting sun," toasted Guy. Ping went their glasses as they touched.

Ghandi continued his grievance, "Charlie the Camel galloped in today. Do you know him?"

"He is a gigantic consumer of our vegan gumbo," Guy gushed proudly.

"Charlie is also a ginormous pinball game fanatic. He does his best to share, but once he gets going, he bogarts the pinball machine and I hear grumbles and groans from the other animals. And, Charlie is a rambunctious gamester, gyrating like Elvis and gurgling when he wins and growling when he doesn't. He grips the machine so tightly that gashes in the wood and glass have started to appear."

"Thank goodness the only creatures waiting a turn were Filemon the Flying Squirrel and Edwina the Egret. After playing a game of Life, they gave up on Charlie and went outdoors to glide to and from between the building's gables, which they know they are not to do."

"Golly, it does sound like a lot of fun," said Guy, glowing from his second martini. He raised his glass. "As the original Ghandi said, 'Hate the sin, love the sinner.'"

"He had such a gracious way of saying things," said Ghandi the Gamekeeper, clinking his glass to Guy's. "'In a gentle way, you can shake the world.'"

G is the theme for week two of Round 22 of ABC Wednesday. Check it out here. Thank you much, ABCW team!