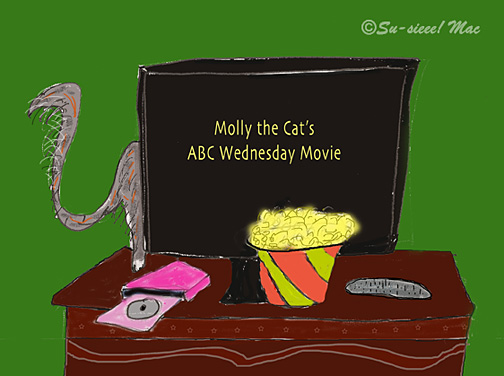 The Humans in this household like to watch movies in the afternoon. Three or four times a week, they do. Their movies come in the mail in a red envelope. I like it when one comes because the Lady or the Hero Man holds up that something-red and announces gleefully, "We got a movie!"

I heard the Lady say that she has seen so many movies she can't remember one from the next. A couple times they got a movie that they've already seen. But they don't seem to mind.

The Hero Man lets the Lady choose the movies. She's purrrrrty even-handed, choosing a sci-fi movie for him for every girrrly movie for her. Both like comedies. Sometimes a movie ends and the Lady says, "That wasn't a comedy."

The Lady decided to do a movie theme for the new round of ABC Wednesday, even creating a list of movies she might write about. But she ran out of steam. "You do it, Molly," she said.

Setting: A fancy hotel in Dublin during the late 1800s.

Albert Nobbs, a butler, pines to have a marriage like his good friend Hubert Page, the hotel painter.  So, Albert sets off courting Helen Dawes, the maid who is in love with Joe, the new boilerman and a big, gross bully. Albert is a reticent mousey-looking person compared to vibrant handsome Joe. Let's see, quiet vs. buzzy? Bland vs. ooh-la-la? Who will stand by Helen when she becomes pregnant?

A straight-forward story, you're probably thinking. Not at all. Adding to the complexity of the tale is this: Albert Nobbs is a woman who chose to pose as a man in order to be steadily employed. His friend Hubert is also a woman disguised as a man.

The movie is based on the novella The Singular Life of Albert Nobbs by George Moore.
It was directed by Rodrigo Garcia, coming out in 2011. Glenn Close played the part of Albert Noble, having first performed the role on stage in 1982. It took her about 30 years to get the stage play made into a movie. Ms. Close was purrrrrrrrrrty awesome. So were the other actors.

A note from Su-sieee! Mac: ABC Wednesday begins round 21 under the new administrator Melody and her new team. It also has a new home. Happy Trails, new ABCW team!  To check out the other participants writing about the letter A, along with linking up, if you're interested, click here.