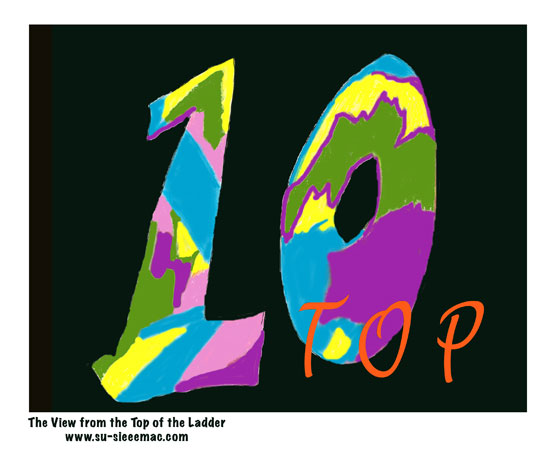 Last Tuesday, I wrote about the first five of my 10 favorite movie characters. Today, I give you the second half of my list. I presented my top characters in ABC order by their first names. If you missed the first half of the list, here's the link. Thanks, again, to Birgit of BB Creations for the suggestion. That woman loves her movies.

Lucy Kelson in Two Weeks Notice (2002)
Lucy (Sandra Bullock) is an activist and public-interest attorney who has agreed to work for corporate I-only-care-about-a-good-time George (Hugh Grant) in exchange for the company not demolishing the community center in her parents' neighborhood in New York. Nearly right away, Lucy is at George's beck and call to help him decide on such personal things as the color of his tie. Why doesn't the hardworking, competent Lucy draw the line between George's legal and personal needs? Simple. She cares too much for George, but she doesn't want to admit it.

This is one of my favorite girl meets boy, girl loses boy, girl gets boy movies. It has one of the best Cinderella scenes in my book: The usual disheveled Lucy is gussied up in a designer dress and hair combed up and back in an ooh-la-la look. George sees her and something sparks in his brain and crotch. He realizes he loooooooooves her. They shyly meet in the center of floor and dance.

But, unlike Cinderella, the spoiling boom isn't midnight, it's the kiss-ass, gold digger replacement for Lucy, who lets it slip that George's company is going to demolish the community center.  After two more great Lucy "Damn you, Replacement!" scenes, Lucy turns a very cold shoulder to George. Was he be able to unfreeze it?


Phil in Groundhog Day (1993)
Phil (Bill Murray) is arrogant. When I first saw the movie, I was ready to bail out after the first scene, because Phil is full of himself. But, Phil is played by Bill Murray so I hung in there. I liked how Phil changed for the better. He goes from having very low esteem and being disliked by people, which is why he's so full of himself, to being confident, friendly, and helpful and very well-liked and loved. Best of all, Phil is able to give his heart unconditionally to the woman (Andie McDowell) he loves.

For those who haven't seen Groundhog Day, the premise is this: Phil's day, which is Groundhog Day, keeps repeating itself until he gets everything right in the minds of the Infinite Wisdom. It had to have taken a very long time because Phil takes up piano lessons and is playing classical and jazz songs by the end of the movie.


Steve Meyers in The Man Who Sued God (2001)
Steve Meyers (Billy Connelly) is my kind of guy.  Others see him as a slacker, a ne'er do well, a loser. Not me. He's intelligent, witty, and sincere. (And, he's portrayed by Billy Connelly.)

Steve's a lawyer who no longer practices. I forget why. Instead, he simply enjoys his life, turning the other cheek. Until his insurance company won't pay for the destruction of his boat from lightening because that was an act of God. Angry, Steve sues God by suing the churches. Ha! He got the church leaders sweating. After all, what if Steve should win.


Susan Cooper in Spy (2015)
Susan (Melissa McCarthy) is a CIA special agent whose job is to be the eyes and ears for her handsome partner  (Jude Law) in the field. By monitoring the surveillance cameras, Susan tells handsome partner through his earpiece where the danger is in the room.

One day, handsome partner gets killed and she becomes his replacement to find the bad guy to the chagrin of the other agents. Susan is miffed that she must disguise herself as fuddy duddy ladies. Doesn't matter. Susan is anything but fuddy duddy.

I love Susan's transformation into a fierce warrior woman who cannot be stopped. Best part was that she had all that good stuff inside her all the time. Worse part, she didn't do anything about it because she fell in love with the handsome partner. That's okay, without the worse part, we wouldn't have a story. I think Wonder Woman would be happy to have Susan as an ally. Wowza! I can already see it. What a duo.

When the movie ended, I actually said, "I'm satisfied." I don't recall ever feeling that way about a movie.


Watts in Some Kind of Wonderful (1987)
I like to think that every girl/lady/woman who marches to a different drum beat has at least one favorite teenage movie in which the awkward girl gets the guy in the end. Some Kind of Wonderful is mine and Watts is that girl for me.  She's described as a tomboy, because she likes to play drums, and wears jeans, boy's shirts, and Converse shoes. That does not make a tomboy. Watts acts tough, but she really isn't. That's her bluff to maintain sanity. Her best friend is a guy (Eric Stoltz) who thinks he's in love with a cheerleader. Watts being the loyal friend helps him go after the girl.

The writer was true to Watts. She didn't have to dress up in girly-girl ooh-la-la fashion to get the guy to think, "Wowza! She's beautiful. I love her." Not at all. The guy realizes he loves Watts when he finally sees Watts for who she is, which she may not—sweet, confused, tender, hard, funny, and supportive. And, when was that? After Watts taught him how to kiss a cheerleader.