A is for Adobo, Pork Adobo 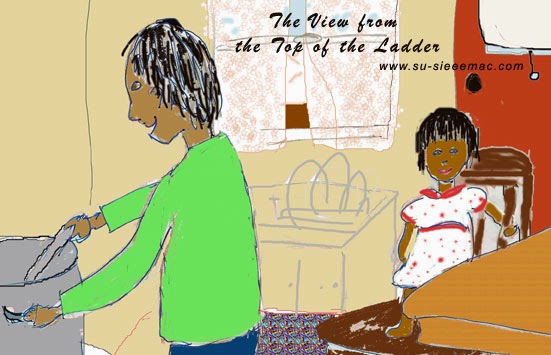 The clatter of metal against metal and heady aroma of frying pork, garlic, and onions lured me to the dark, cool kitchen that hot summer morning. At the stove was the Daddy's young cousin who was staying with us while on leave from the Navy. One hand shook a large grey soup pot on a burner, and the other hand stirred the ingredients rapidly with a large silver spoon that made a rhythmic clang against the inside of the pot. His body swayed and seemingly danced. The sizzle of the meat and vegetables was his music.

I was maybe four or five years old. I don't recall the Mama being home, otherwise why would the handsome, dark-haired man with a sweet smile be at the Mama's stove. But, maybe that day the Daddy's cousin said to the Mama, "Let me cook." So that she could care for Baby Sister who Died too Early. Now that I think of it, that was more likely what happened.

The Daddy's cousin smiled at me as I came up beside him.  "What's that?" I asked, most likely taking a deep breath of the developing delicious perfume. I had never smelled anything like it before.

"Just you wait then."

As I remember the Daddy's cousin, my imagination sees him as a magician dancing a ballet. In my mind's eye, I see him pouring apple cider vinegar into the pot, next sprinking salt and pepper, and then tossing in a bay leaf or two.  .  . .Clang, Shake, Sizzle.Clang. Clang. Sizzle. Shake. . . Finally, he throws in a healthy amount of spice that brings the dish together -- paprika. He continues wildly. . .Clang. Clang. Shake. Clang. Clang. The sizzle has turned into pure jazz.

With one last clang and shake, the dish is done. Then with great flair, he spoons the tender, glistening red pork on a large plate.

I don't recall eating lunch, but most likely the Mama, the Baby Sister who Died too Early, the Older and Only Bionic Brother,  the Daddy's Young Cousin, and I sat in the cool, dark kitchen eating the pork adobo with rice. No doubt that was the day pork adobo, cooked Ilocano style, became one of my favorite dishes.