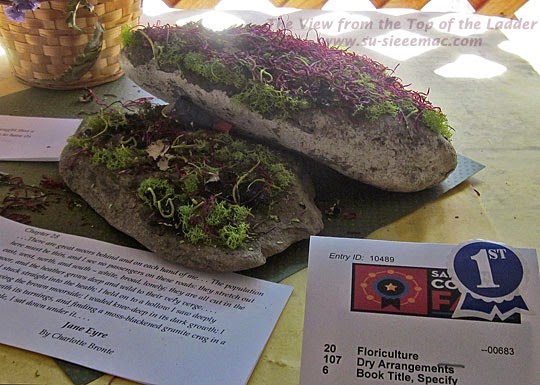 So, what took me so long to read Jane Eyre?

I was introduced to the novel in seventh grade when our English class watched the 1943 movie starring Orson Welles and Joan Fontaine. Until I watched the 2006  BBC series of Jane Eyre with Toby Stephens and Ruth Wilson, I had no idea that Jane Eyre had a lot of gumption, courage, desire, determination, and smarts. Ms. Fontaine's portrayed Jane as meek and overpowered by the selfish Rochester. Then after I saw the 2011 film of Jane Eyre, starring Mia Wasikowska and Michael Fassbender, I finally decided to read the novel.

Wowza! I love Jane. She stands up to Rochester from the moment she meets him to the moment they finally reunite. Rochester is a fortunate man because he has Jane's love. I admire Jane for the way she keeps moving forward, without bitterness,  no matter how tough life gets.  Atta Girl, Jane Eyre!

At last year's county fair, I entered a dry flower arrangement under the book title category, illustrating Jane on the moor, where she wandered about grieving after leaving Rochester when she learned he was married. That's the entry in the photo above. Yup, bits of moss and lichen glued to two rocks. This passage from Chapter 28 in Jane Eyre accompanied the entry.

...There are great moors behind and on each hand of me...The population here must be thin, and I see no passengers on these roads: they stretch out east, west, north, and south -- white broad, lonely; they are all cut in the moor, and the heather grows deep and wild to their very verge....
I stuck straight into the heath: I held on to a hollow I saw deeply furrowing the brown moorside; I waded knee-deep in its dark growth; I turned with its turnings, and finding a moss-blackened granite crag in a hidden angle, I sat down under it....

Jane is barely visible in the photo. So, here's another a photo of when I was putting together the arrangement. Jane is represented by that rolled piece of blue denim as her cape and a red bit of fabric for her bonnet. 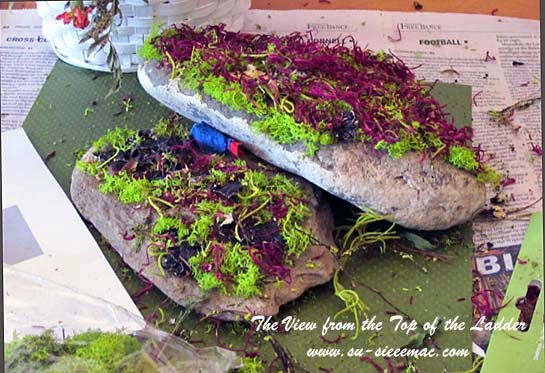 In case, you all of a sudden want to purchase a copy of Jane Eyre, rather than head to your local library, here's a link to Amazon. By the way, should you purchase anything at Amazon via this link, I may be given a few pennies for the referral.  FCC wants you to know that, as do I.