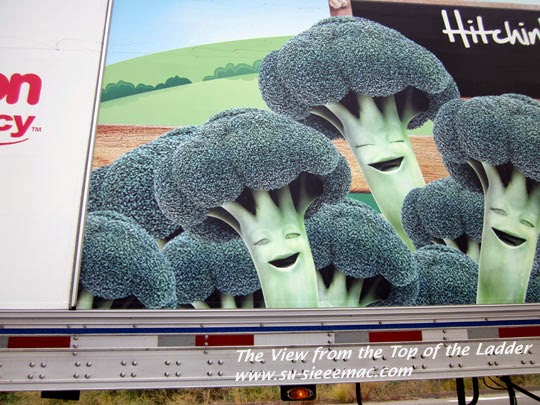 I'm not going to talk about garbage, other than to say that tonight we put the garbage cans out on the curb.  It seems like I just brought them in, which is my way of saying that lately the days go by much too quickly. I had planned to write a post on Monday, then yesterday, and then before lunch this morning. Now, I want to post this before I start making dinner in um 20 minutes.

It's going to be a good dinner, too. We went to the Farmers Market this afternoon. All three of us—the Mama, the Husband, and me. It was a rare outing for the Mama and even rarer because she initiated the adventure. She was able to walk a block, back and forth, before she tired out. Hurrah for the 90+ Mama! Although, afterwards, when she plopped into the car, she said, "I don't think I will come anymore." And, when we reached home, she said, "I don't think I can go anywhere anymore. I want to sit down all the time."

We could get her a walker with a chair so that she could sit whenever she wanted, but she won't push a walker. She won't use a cane for that matter because she feels that using a cane makes you get older quicker. Maybe she's right. I don't know. I like using a walking stick when we go on hikes. It gives me false confidence when I'm going downhill. Anyway, I'd like to find something that we can subtly carry and open for her to sit whenever she needs to rest. Any ideas?

Okay, time for me to go make dinner, which will be fresh basil and garlic pasta, Italian basil mozzarella sausage, with steamed sugar peas and asparagus. Dessert will be a slice of cinnamon roll and fruit salad composed of apple, peach, strawberries, and nectarines. Except for the apple, everything was purchased at the Farmers Market. I love going to Farmers Markets. How about you?

By the way (I know, I'm being non-sequitur today), the happy broccolis was on the side of an Albertson's truck. I took the photo as we were driving down the freeway to San Diego for the 60th wedding anniversary of the Husband's Uncle and Aunt. I was planning on writing about our weekend adventure and maybe I will one day.