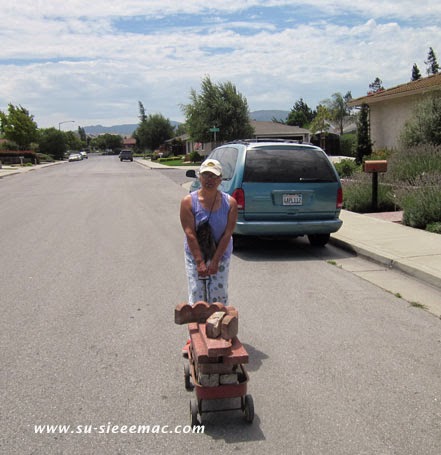 This afternoon, I pulled a little red wagon down our driveway to the end of the street, around the corner, and over to the next block. The Husband walked ahead of me, looking for the house in front of which 20+ red bricks, three 18-inch scalloped bricks, and one half-circle of scalloped brick laid waiting for us. All free, courtesy of a recycle-friendly lady who we've never met.

Yesterday, an email popped into my box from the local freecycle group to which I subscribe. Usually, there's nothing that I want. Well, actually sometimes I do, but then I hear the Husband's voice in my head say, "What are we going to do with it? We still have a storage room full of stuff that we need to deal with." I heard him say that in my head as I read about the free bricks, but my inner voice overrode it. Bricks! These bricks can come in handy.

I quickly wrote a response and asked if the bricks were still available. Yep, they were. I wrote that I would take them, sent off my email, then said to the Husband, "I'm picking up some free bricks tomorrow."

Pshew. He did not say what I heard in my head. What a guy I married.

It turned out the brick-giver lived one street over from us. "Do you think the little red wagon could carry those bricks?" I asked the Husband at breakfast.

The Husband is so adorable.

I could hardly wait to go pick up the bricks. Not because I wanted to bring them home, but because of the means by which it would happen—pulling a little red wagon with the Husband.

As I hopped around the house trying not to be impatient about going already, the Husband finally asked, "What are you going to do with the bricks?"

"I don't know yet. Maybe make a pizza oven."

"Well, they're a start. Right now, I'm just building an arsenal for us."

"An arsenal?" he asked. "Are you thinking that we will need to be ready to throw bricks someday?"

At noon, we were on our way. I pulled the loud rattling, little red wagon all the way there. I hoped I wasn't waking up babies or the elderly from their naps.

The Husband is a former warehouse manager ("I was a supervisor," he will correct me, and I will respond, "In title only. You did management work. Your idiot bosses were just stingy."), which meant the bricks were loaded onto the wagon professionally and nothing fell along the way. We took turns pulling the wagon and pushing it from behind. The two of us must've been a sight to behold.

We got a load of free bricks and we had loads of fun getting them. Best of all, today is the 23rd, our monthly date. Pushing and pulling a little red wagon full of bricks down the street was a great way to start us off.  As the Husband said, "It doesn't take much to make us happy."