The Tale of Mr. L. Gatto Cat: The Prequel 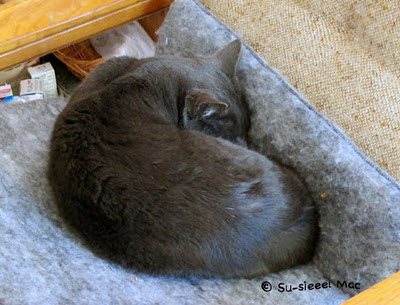 This is what the Husband, the Mama, and I wrote on our 2011 Christmas letter (Yep. We're that kind of people.): The gang of. . .<our address> has expanded to four. Mr. Cat, aka Mr. L. Gatto Cat, aka Mr. Lionel G. Cat adopted us around Thanksgiving Day. A stray budding YA kitty, he suckered us with his cuteness and friendliness.

Mr. L. Gatto Cat left as suddenly as he arrived into our lives. It was almost like he had been on vacation and we had been his vacation destination. He was given a winter shelter. He was fed topnotch food—no grain fillers. And, he had attentive humans to pet and play with him when he was not sleeping. Mr. Cat cat slept a lot, I tell you what. I never knew that cats sleep so much.

We had cats when I was a kid. Lots of cats. There were always at least three or four of them wandering outside in the backyard.  During the winter, they slept in the garage. Almost daily, they liked to slip into the house when anyone went through the door to the garage. I was constantly chasing cats and putting them back outside.

I like cats but I don't consider myself a cat person. If they happen to come up to me, I'll put out my hand and wait and see if they want to be petted. Yeah, I can be just as reserved as a cat.

Once in the early 1980s, I brought home a stray cat that came up to me in a restaurant parking lot. It was a momentarily lapse of judgement. I was also toasted on lunch-time wine and heavily influenced by surrounding co-workers who all had cats.

That '80s cat was your everyday alley cat. Grey. Striped. Independent. His name was Lionel. Truly, I had no business being a cat caregiver back then. I worked long hours most days, and until Lionel came home with me, I lived alone. Poor Lionel roamed the apartment by himself most of the week. On weekends, I sometimes found his constant being around me annoying, so I closed myself up in the bedroom to get some alone time. Lionel gave me an hour before impatiently meowing for attention from the other side of the door.

At the time, I lived in a third floor funky flat in foggy San Francisco. Lionel came from the big, open outdoors of bright and sunny Hayward in the East Bay. The small living room window of my apartment overlooked the rooftop of the next building. Every work day, I left the window partially opened so Lionel could have fresh air. Lionel, being smart and adventurous, jumped through the window to the rooftop. The buildings were literally inches apart, so dear readers, there was no danger of him falling to the ground.

I discovered that Lionel hung out on the rooftop when one day I came home before the sun had set. As I walked down my street, I heard a cat meowing from above. The cat's call became more insistent as I approached my apartment building. A dread came to my heart. I looked up. Lionel was looking at me from the rooftop of the next-door building.  What the heck?

Up the three flights of my building I sped and quickly unlocked the front door. "Meow," greeted Lionel, as I opened it.

This became a regular thing with Lionel. This was also an unacceptable thing in the neighborhood. A couple of months later, an animal shelter guy knocked on my door. "We've gotten reports that a cat stuck on the roof next door. Have you seen or heard it?"

"Uh, that's my cat. He likes to go out there when I'm at work." The animal shelter guy wasn't sure how to deal with it. I promised not to let Lionel out anymore.

Lionel needed to live where he could roam freely. My solution was to have him live with the Mama where Lionel would be able to wander in her backyard and in the field behind her house if he so desired. There was also the added factor being able to play with the cats that she cared for in the backyard.

That '80s cat lived with the Mama for about six months. Lionel liked roaming up on high. He figured how to get up on the roof of the Mama's house, but not how to get back down. The Mama was still working and getting used to being a widow. She did not need the additional stress of climbing a ladder after work to rescue a meowing city cat from her roof. So, in the end, a new home was found for Lionel.

After Lionel, that '80s cat, scampered out of my life, I figured that was the end of any intimate relationship with cats. Until. . . December 16, 2011: I'm falling in love with a cat.

To be continued on Thursday.