L is for Luxury

Well, I shall be next week.

The husband indulged me with a gift certificate for books for my birthday. That is my favorite kind of present. Thank you, sweet husband!

This year, I took my time selecting the books that would be lined up to be read in the coming year. I wandered around a bookstore first, checked out several book blogs, and glanced at a few book lists. Here's what I finally chose (If you want to hear today's Christmas song as you read about the books, scroll down and click on the video first):

A Night Too Dark by Dana Stabenow. This is the 17th novel about Kate Shugak, a private detective in Alaska, who has a homestead in a national park. In this story she investigates the murder of a roustabout who works for a company that wants to open one of the largest gold mines in the state.

Locked In by Marcia Muller. The author's Sharon McCone series has been around since the late 1970s. It's one of my favorites. Sharon is a private detective in San Francisco. The summary states that Sharon was shot and now lays in a hospital bed unable to move or speak, but her mind is conscious. 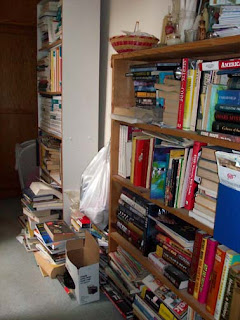 How to Crash a Killer Bash by Penny Warner.  Here's another mystery series with a female amateur sleuth set in San Francisco. The protagonist is a party planner.

Last Night Twisted River by John Irving.   From the reviews, this story seems to incorporate many of Irving's "gimmicks" (for a lack of a better term) such as bears.  I haven't read his books in almost a decade, so we shall see if I still think of him as one of my favorite authors.

The Sweetness at the Bottom of the Pie by Alan Bradley. I didn't know this story is classified as detective fiction. I was just sold on the idea of an 11-year old girl named Flavia de Luce and her eccentric family living in an old country house with an old Victorian chemistry lab that only Flavia likes to enter.

Mr. Monk is Cleaned Out by Lee Goldberg. I miss the "Monk" series on TV.

Founding Brothers: The Revolutionary Generation by Joseph Ellis. A non-fiction book? Uh-huh, and a Pulitzer Prize winner, to boot, about Adams, Washington, Jefferson, and the other people who helped form the United States.

Craft Hope: Handmade Crafts for a Cause by Jade Sims.  This book provides instructions on making various crafts that are matched to charities for which the crafts can be given.  Craft Hope is an online group that hosts projects throughout the year to help others.

Dress Your Family in Corduroy and Denim by David Sedaris. A few months ago, I watched Sedaris being interviewed by Jon Stewart and was instantly taken by Sedaris' charm and wit. So, of course,  I had to chose a book of his essays.

At Swim-Two-Birds by Flann O'Brien was published in 1939. I'd never heard of it until two days ago when I wandered around the bookstore. The title caught my eye. The story is supposed to be about a college student who writes a novel about a guy who is writing a novel.

Is your head spinning? Are you exhausted from reading all the descriptions. I am.  Too bad I don't have four minds the way cows have four stomachs. I could then really read four books at the same time.

But, wait, I'm not done yet. To add to my list of luxury items are birthday presents from my friends:

Travels with Zenobia: Paris to Albania by Model T Ford, by Rose Wilder Lane and Helen Dore Boylston.  Lane was the daughter of Laura Ingalls Wilder and Boylston wrote the Sue Barton, Nurse series. The two women did this road trip in 1926. Thanks Missus Kate!

The Guernsey Literary and Potato Peel Pie Society by Mary Ann Shaffer and Annie Barrows.  The story is about the residents of the island of Guernsey during WWII when the Germans occupied it. The authors tell the story in the form of correspondence between a Guernsey resident and a London writer in 1946. Thanks evil2win!

Oh, and there's one more. Since I was at the bookstore, I decided to buy a birthday gift for myself. He he. I'm now reading Glazed Murder by Jessica Beck. Suzanne owns a doughnut shop in a small town. Very early one morning, as she's opening her shop, someone dumps a body in front of it.  Guess who's going to figure who the killer is?

Books, books, books!  I love the luxury of owning them!

Today's Christmas song is "Sleigh Ride" by Glenn Miller and his orchestra. And, don't forget to swing over to Alphabe-Thursday to read other "L" posts.