The Ups and Downer of the Weekend

November 15, 2010
Because Veterans Day fell on a Thursday this year, the past weekend was a four-day one for some folks. A few of our friends think that the husband and I have a seven-day weekend because we work at home. I say they're just envious. But, I admit that if I ever had to do a 9 to 5 job again, it would be a very difficult adjustment. So, knock on wood that won't need to be.

Anyway, back to the highlights of the weekend. 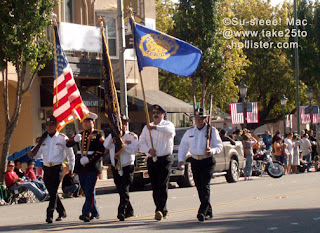 The husband and I went downtown to watch the Veterans Day Parade. That was the first time I've been to one. Ever. It was a short, but fun, parade.

If you love a small town parade, come to Hollister, California.  A couple weeks ago was the high school homecoming parade. A couple of weeks from now will be the "Hey, it's time for Christmas!" parade. That's not the real name, but you know what I mean.

Other annual parades that march through downtown include the Portuguese Festival Parade,  the Horse Show and Rodeo Parade, and the Mexican Independence Day Parade.

That's what popped out of my mouth about one hour into our three hours of doing research in a library. Fortunately, it was not at our city library, but the one in the town and county next door.  I didn't mumble it or say it under the breath. I said it quite loudly so every kid and adult in the children's section heard me. There was immediate stunned silence, including from the husband who just a second before my outburst had been talking to me about our research. We were talking in just-above-whisper tones, which was hard to hear because of the NOISE around us.

Being that it was the children's section, some kind of noise is to be expected.

Quiet noise, that is.

Not toddlers shrieking. Not small kids who were talking in outside voices as they played? worked? on computers half the room away from us. Not middle schoolers giggling as they chased each other up and down the aisles.

The unsupervised children wasn't even the worse part of it all. The worse was seeing parents stand or sit next to their children who shrieked and talked in outside voices. Obviously, they had learned to tune their kids out.  The librarians? They sat about 10 feet away. Shelves blocked their view from the children's section. So, I suppose, their motto was similar to Sgt. Schultz on Hogan's Heroes, "I see nothing! I know nothing!"  None of the librarians looked happy to be there.

After my outburst, some adults and children tried to monitor themselves and others. Ssssh-shhhh!  A half-hour or so later, the husband and I moved to the quietest corner we could find, where all we had to contend with was the constant chatter of the library technicians at the circulation desk, and later a teenage boy who droned on about nothing to a teenage girl who barely responded.

What ever happened to the standards of Quiet! in libraries that librarians establish? 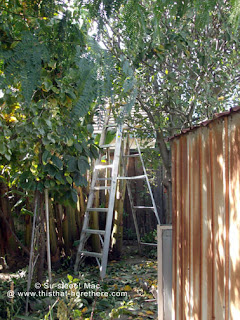 Saturday
Every now and then, the husband would look at me and crack up, as he remembered my outburst the day before. I'm glad I continue to amuse the fellow.

Most of the day I was on a ladder pruning an apple tree in the backyard. The husband joined me after lunch to reach the tall branches. The mama sat beneath us stripping leaves off the branches and cutting branches so they would fit into the green recycling bin.

We worked until almost sunset. A good time was had by all.

By the way, I understand why the mama likes to get up on the ladder. There's something rather freeing, and risky, by being up there. In other words, cheap thrills.

Sunday
Have you ever heard a British-style brass band?

Try it, you might just like it. That's what the husband and I did on Sunday afternoon. We made our way down to a local church to hear the Pacific Brass Band, a group of local musicians, perform a diverse range of marches, hymns, folk songs, and other pieces. The band is composed of brass instruments only—cornets, tenor horns, flugelhorns, trombones, and tubas. Oh, and percussion, too. Gotta have that beat.  It was amazing how the band got such a full concert-hall-size sound in the church.

I couldn't find a sample of the band's music, but I did find a fun video that will give you a general idea of what a British-style brass band sounds like.  Take it away, Mr. Bean.

P.S. Hope you had a glorious weekend, too, with more ups than downers.