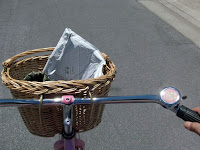 The little boy, maybe 2 and a half or so, stood on the edge of the lawn pointing happily at the red and orange leaves in the gutter. He wore no hat nor gloves. He had on no shoes or socks. He wore only a short-sleeved tee-shirt and thin shorts. The temperature was in the 50s. What the heck was he doing outside?

As we pedaled by him on our bicycles, I did not see any adult keeping tabs on him.

A few houses down the street, an elderly man was mucking about in his garage. "Excuse me," I called, hopefully, "Are you missing a boy?"

"There's a little boy on the corner. He isn't wearing any shoes or socks."

"That's not good," said the man looking up the street.

The husband and I turned back.

The little boy couldn't or wouldn't answer any of our questions. "What's your name?" "Are you lost?" "Where do you live?" He merely wanted us to look at the pretty leaves in front of him.

Nobody was home. Would people really abandon their kid like this?

The little boy followed me to the next house, pointing at every thing that seemed to fascinate him. No one answered the doorbell. Dogs barked from inside the garage. No doubt they were warm.

All the houses around us seemed tightly shut. I did not want to knock on every door. Was nobody asking where their little boy was? What were we going to do with this kid? It was time to call for the police.

While the husband talked with the dispatcher, I needed to keep the kid warm. He was healthy and big for his age, but I did not want him coming down with hypothermia.  I'm sure the almost three feet tall boy looked quite funny wearing my pink skull cap,  orange gloves, orange jacket, and purple sneakers.

After the husband got off the phone, he went and knocked at a house where we had seen small kids play in the front yard. Fortunately, the husband's bright chartreuse bike kept the little boy mesmerized to stand in place with me. As he stood gazing at the bicycle, I noticed a woman walking up the street from which we had turned back. She was talking on her cellphone. I called to her, pointing to the boy, "Is this your son?" She kept looking at me, so I kept repeating myself.

As she crossed the street, the little boy shouted gleefully, "Mama, mama!"

The woman continued talking on the phone until she reached us.

"What's your name?" I asked the woman.

She looked at me unsurely. Remembering that she was speaking Spanish on the phone, I asked again, "¿Come te llamas?"

Then she woke up. Another fortunate break: she spoke English. It turned out that her son had been standing in front of his house. He probably slipped out of the garage when her husband had the door open. (The door was closed when we were there.) She had been in the bathroom so didn't know that her son was not in the house.

I'm just glad all turned out well.  I hope.

The lessons I learned yesterday afternoon.
Maybe the husband and I should've minded our own business. But, if you saw a small child wearing only a tee-shirt and shorts in the cold, without any adult supervision, would you do nothing?