G is for Giants 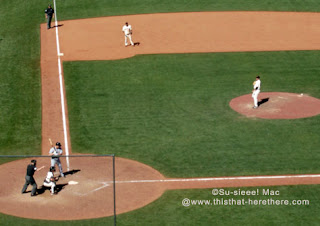 San Francisco Giants, that is.

I admit it. I jumped onto the bandwagon when the Giants won the first game of the National League play-offs.

I watched some of the second game, they lost.

I missed the third game, they won.

I saw a bit of the fourth game, they lost.

I decided I was a jinx. So, I stopped watching. I didn't even read Facebook updates on how they were doing, and just read the headlines the next day.
Since I stopped paying attention to baseball after the 1995 baseball strike, I had to show my loyalty to the Giants by not watching them win the NL pennant and the World Series championship. Boy, did I miss some good baseball!

Between 1986 and the baseball strike, I was a Giants fanatic. Those were great years. Roger Craig was the "Hummmm, baby" manager. What a crew he had.  Together, Craig and team eventually worked their magic to play against the Oakland A's in the 1989 World Series. Unfortunately that series played second fiddle to the 7.0 Loma Prieta earthquake that occurred just before the third game began at Candlestick Park. I believe that there were fewer casualties when the freeway collapsed because so many us were settled in for the game.

Crazed fan, probably a bit. Does a grown woman buy trading cards for the thrill of finding a Giants player? Yeah, I still have the baseball cards.

The 1989 Giants were brilliant.  "Big Daddy" Rick Reuschel and "The Caveman" Don Robinson, my favorite pitchers, were big galoots who delivered magic from that mound. I loved how Craig put Robinson in as a pinch hitter, and he often delivered. There was the triple play combination from shortstop Jose Uribe (uncle of Juan) to second baseman Robbie Thompson to first baseman Will Clark. Fhlump! Fhlump! Fhlump!  Sweet! And, there was that time, Kevin Mitchell, in left field, caught a fly ball barehanded over his shoulder while running full speed. He managed to run into the door that wasn't locked rather then into the wall. That was so wild.

I won't even get into my summers of watching the Giants on TV as a kid. Except to say Willie Mays is the man! Always and forever.

So, even though I've only gone to a few Giants games and watched the games on TV with little passion these past 15 years, I am very, very happy that the Giants won the World Series.  Those guys were playing baseball big time and joyfully with their hearts and souls. I would've loved to have watched them.

You want to see some real avid Giants fans. Check out this video.  Then, afterwards, head over to Alphabe-Thursday, hosted by Jenny Matlock for more tales starting with the letter G.