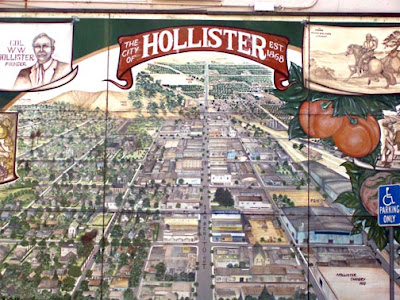 "What's with all these Hollister tee shirts?"

That's the kind of question folks would ask me when they learned I was from Hollister, California.

"I was standing behind this gal wearing a sweatshirt that said Hollister on it. 'Hey, I'm from Hollister, too?' She looked at me like I was some kind of perv."

That's the kind of story I would hear from local folks (or folks who used to live here) about their first encounters with the Hollister line of clothing sold by Abercrombie and Fitch.

Most of you, dear readers, most likely know that the Hollister clothes sold in stores nationwide popularize a fabricated beach town called Hollister, California. It would be funny if it weren't for the fact that a few years ago, Abercrombie and Fitch came through our very real town and told small business owners to stop selling any and all clothing that have Hollister printed on it. If they continued,  the corporation would sue the small business owners to high heaven. By golly, by gee.

I don't get that reaction from the corporation at all. Is it afraid that the teens and tweens will want to buy clothes that shouted Hollister from the actual town? Let's see. The store's fictional Hollister is a surfer's haven. The real Hollister is the center or an agricultural-based county and about 30 miles from the nearest beach.  So, kids who aren't into farming would want to sport a piece of clothing that brings to mind cattle and organic lettuce? Really?

P.S. The corporation won't open a "Hollister" store in our town because we don't fit its demographics.