The blogathon is a few days away from being done.  Hooray. I've decided that my daily posting experience would be incomplete without a mention of sweet baby Cu'Pie. Those who knew Cu'Pie would agree.
Cu'pie stands for Cutie Pie and he was a bright (as in color and intelligence) little budgie that flew into our backyard in another place and time. He hopped into our house and lived with us for the next 11 years. Cu'Pie first hung out with the husband and me, then the mama, and finally with all of his three humans together.  He taught us many things, including unconditional love. We taught him how to say "Chirp. Chirp."

So, dear readers, today I give you a post previously published on June 12, 2007 in my first blog, Cu'pie Baby Bird Says "Chirp. Chirp." (Yes, I like long titles.)

Cu’Pie was a bilingual baby bird. He spoke his brand of parakeet as well as human. When he hung out with Greening, another parakeet of a different breed, he learned to screech and squawk her language. So, maybe being multilingual would be a better description of the little yellow bird.

He had a good-size vocabulary, I thought. When he was younger, he was constantly saying words and phrases. Much of it we couldn’t understand. I suppose if the humans didn’t speak clearly, neither would he. In his later years, he repeated only a few things that were obvious. Mostly “Cu’Pie.” “Dicky.” “Frances.” “Kiss. Kiss.” And my favorite one, “Chirp. Chirp.” How many birds have you heard say the human translation of a bird chirping?

I often wondered if Cu’Pie knew what he was saying. In our early years together, Cu’Pie and I spent our days working away in my office. His favorite thing (so I thought as he did it a lot) was to fly over and sit on my shoulder when I was talking on the telephone. Sometimes he sat silently while he eavesdropped, sometimes not. This one particular afternoon I was talking on the phone with Winifred. We were discussing a problem that I was having with our writing project. Cu’Pie sat quietly as I droned on and on and on. When I was done, Cu’Pie piped up, “What shall we do?” 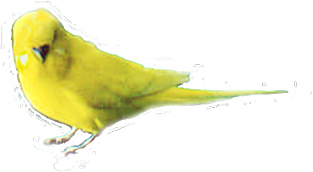