Superstitions of the Mama 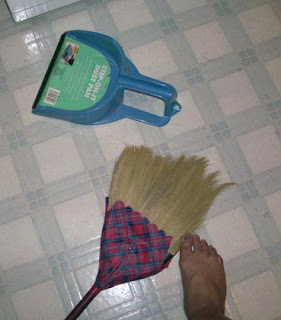 I now sweep the kitchen floor after dinner while the husband washes the dishes. I used to do it in the morning. That is when I remembered. Most mornings, I didn't.

Until recently I rarely swept the kitchen floor in the evening because I was taught to not do that unless something bad happened such as a glass broke on the floor.  So, what changed? I read an article about 10 good cleaning habits to have, of which one was sweeping the kitchen floor after dinner. Made sense. No stepping on crumbs or unpopped popcorn first thing in the morning.

The other evening the mama caught me sweeping the kitchen floor. Just as I thought she would, she said, "It's bad luck to sweep at night."

"Why?" I asked. She didn't respond. She just left the kitchen. I doubt she has an answer for that or any of her  superstitions.  I think grownups taught her superstitions when she was a kid as a way of getting her to obey. I also think that she made up her own to control my actions many years ago. For instance:  Don't stand on the table or your children will do that. Don't play with your food, God will get mad. Don't sing at the table, it's bad luck. Don't whistle, you'll grow a mustache.

Tonight while sweeping the kitchen floor, I asked the dishwashing husband why he thought it was bad luck to sweep at night. His theory is this: Something bad probably happened to someone who was sweeping the  floor after dinner. After that others told others not to sweep the floor because it was bad luck.  Makes sense.

As I threw away the swept dirt in the garbage can, the husband said to me, "I cut my fingernails today. And it's Tuesday."

"I so wanted to cut mine today, too," I said. I didn't because it's bad luck to cut your fingernails on a Tuesday, according to the mama.

The husband then said, "Years ago, I read in the Farmer's Almanac that if you cut your fingernails on Tuesday, you'll get rich. So whose right?"

"The authority you wish to believe," I responded. First thing tomorrow, I'm cutting my fingernails.