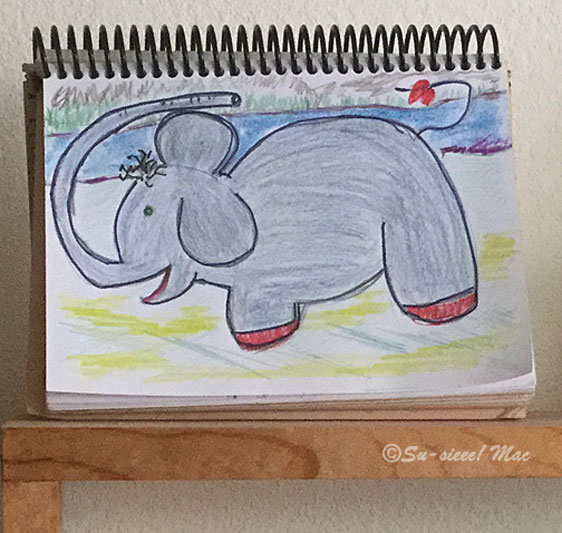 Today I'm sharing a couple of pages from my art journal which I started a few months ago. I keep this journal and a box full of colored pencils and pens and a heart-shaped box of crayons near my seat in the living room. The journal gets opened at night when I'm not interested much in what's on TV or when I suddenly get a yen to draw and color something.

Lately, for reasons unknown to me, elephants have been finding their way out of my imagination. I draw them on paper. I paint them on plates. I'm considering creating an elephant figure out of some of the chicken wire in the backyard.

Freida is the name of the elephant up there in the photo. The Husband named her. Freida is a cutie with her curly bangs, red hoofs, and red ribbon. I wonder what kind of adventures she has been on. 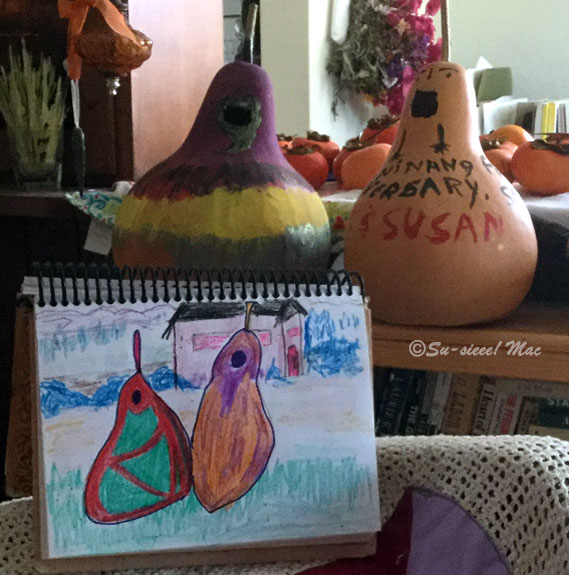 The singing gourds in my drawing were modeled on two dried gourds that Godmother Pat and Darling Jenn painted for us at our #21 anniversary party in September. See the lovely gourds in the background?

The Husband asked me last night, "What's the story about the singing gourds?"

They remind me of the Von Trapp Family. Remember The Sound of Music—"The hills are alive with the sound of music. . ." la, la, la, laaaaa.

By the way the gourds were grown by the Mama. When gourds are young and green, they're delicious to eat in a soup or stew. The Mama always dried a few of the gourds for seeds. That's why the gourds sport holes. Rather than throw the gourds away, she kept them in hopes that I would paint them. When I was a teenager, I painted a gourd dark blue, giving it a red bow tie and buttons. The Mama turned it into a piggy bank. Every time I happened to be with her when she put coins into the bank, she'd say, "Paint some more." I started on one this morning.

I'm hooking this post up with a new meme called Weekend Journal Page hosted by Jesh of Artworks from JeshStG.