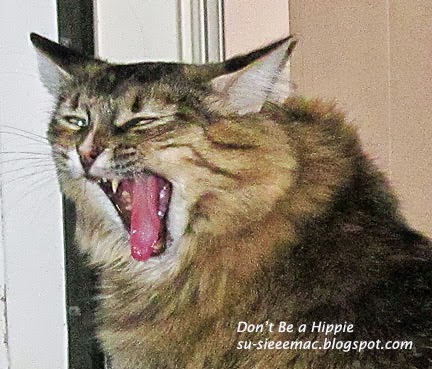 I think it is made from sheep, because that's the artisanal stuff we bought at the independent, natural goodness supermarket in Santa Cruz last week.

I forget that cow's milk isn't the only source for cheese until I eat cheese that's made from other animals. Maybe if I'd been more careful, I could've found the good ricotta made from cow.

For breakfast I ate a peanut butter-ricotta-honey sandwich. As I chewed, I thought of sheep, their wool, their face, and their hooves. I recalled the Warner Brothers cartoon in which the wolf wore sheep's clothing to get closer to the sheep. The sheepdog always beat the wolf at his game. Of course. The funniest part about the cartoon was the end when both the sheepdog and wolf clocked out of their work shift and said, "See you tomorrow."

Molly the Cat came mewing to see what I had for breakfast. She likes cheese, too. I gave her a pinch of the ricotta from my sandwich.  Sniff, sniff. She walked away.

Not too soon after Molly left, I picked the cheese out of my sandwich. There's only so much sheep whey my taste buds and stomach can handle.

Don't even get me talking about lamb. Shudder.

P.S. That's an old photo of Missy Molly by Golly. I like to think that's what she thought of the ricotta this morning.