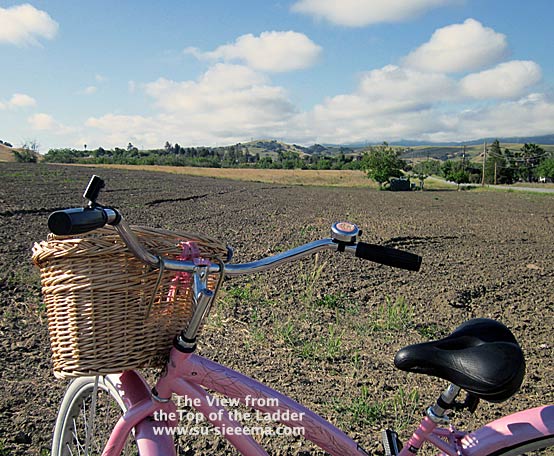 Riding Tilda-Hilda gives me the opportunity to think. Riding her also lets me not think, if that's what I need at the moment. Thank goodness that I have Tilda-Hilda. She has been with me for almost 13 years. By golly,  gee, she's the oldest bicycle I've ever owned.

As some of you know, I signed up for the National Bike Challenge to keep me motivated to take Tilda-Hilda out of the garage. The challenge runs from May to September. Its goal is to sign up 100,000 riders who all together will pedal 75 million miles by the end of the challenge. As of the 15th day, 32,181 riders have signed up and we have pedaled 2,322,172 miles. Tilda-Hilda and I have gone out six of the 15 days thus far, pedaling 48.3 miles. Whooo-hooo!

The past two weeks, the mornings have started in fog so Tilda-Hilda and I haven't gone out as much. The fog lifted by mid-morning today, so, weather may be changing. We shall see.

I'm linking up with Seasons, a weekly meme hosted by Jeanette of St Germain's Blog. Click here to join along and/or check out the other participants.