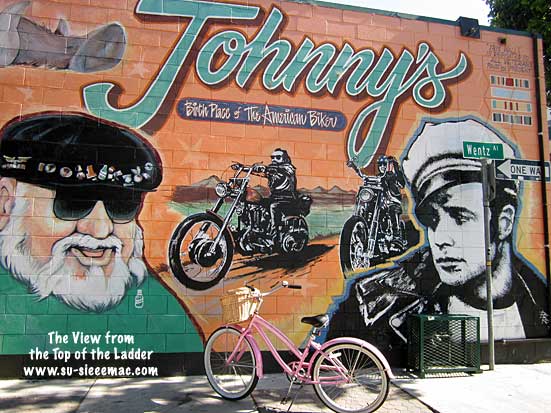 Tilda-Hilda and I had an excellent ride this morning, 10 miles in 55 minutes. It resulted in me sweating afterwards for quite awhile. Zap! Zap! Zap! Take that, Fat Cells! Mwaaahhaaa.

We're not scared of hills, I'll tell you what, as Hank Hill (of King of the Hill) might say. We pedaled up a hill, coasted down another, and pedaled right up another one. I don't know about Tilda-Hilda, but I feel like I could face anything. Even the black rat that may be in the backyard (See the previous post). I saw a cute black kitten scurry quickly around A&W, which made me wonder if the black rat is actually a black kitten. I can only hope.

We stopped downtown for a photo in front of the biker's mural that celebrates Hollister as being the "Birthplace of the American Biker". Yes, that's Marlon Brando gazing wistfully at Tilda-Hilda. Did you ever see that movie The Wild One, in which Brando played a supposed rebel of a biker? It was loosely based on a 1947 out-of-control biker moment that took place in Hollister. Hence, the reason for Marlon Brando being on the mural. If you'd like to know more about this bit of Hollister history, check here.