B is for Turning Blood into Pudding 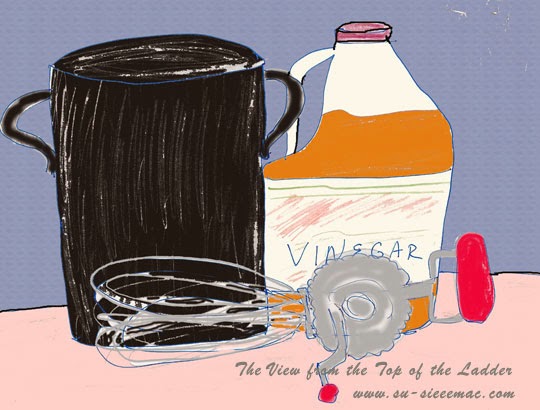 I bet that title caught your attention. Maybe you shivered and thought I must be a vampire. Of course not!  Or, maybe you went, "Ewwwwwwww!" Well, turning blood, pork blood, to be precise, into pudding is definitely not for the squeamish.

I was ten years old when the Daddy gave me the task of turning pork blood into pudding. (If I could, I'd put in a sound effect like Dum da da dummmm!) Okay, let me give you some context. Back then, every now and then, the Daddy and his friends would purchase a pig from a local pig farmer, bring it back to our house, and slaughter it in the backyard. We lived in a small neighborhood two miles out of city limits so that was okay, and, as far as I know, the neighbors did not care.We lived in a rural area after all.

This usually happened on a Saturday morning. The men would be out in the backyard partying it up with a bottle of whiskey as they butchered the meat. The pig's blood would be brought into the house to turn into a thick-like pudding.

You beat the blood with an egg beater while someone poured vinegar into the pot. How much vinegar? I don't know. Whoever poured it always knew when was enough. You stood there and turned and turned the handle of that egg beater. Eventually the bright red blood changed into a foamy mixture and finally into a thick rich chocolate colored pudding.  It was like magic to watch it thicken.

By the way, if you ever go to a Filipino party and someone asks if you'd like to try the Chocolate Meat, know that is pork cooked in blood. I think it's tasty. But, then I'm a vampire. Bwah-ha-ha-ha.