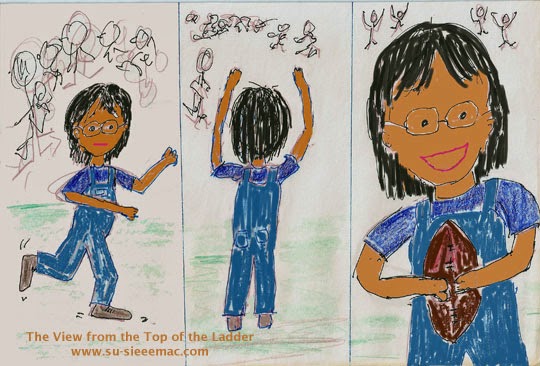 It was cold and foggy on the day of the club picnic. What better way to get warm than to play touch football.  That day, nearly 40 years ago, was the first time (and the only time ) I've ever played the game. We didn't even play it in girls PE in high school, which now when I look back, I wonder why. We had field hockey (loved those sticks), archery, swimming (my favorite), soccer (hated all that running), folk dancing, tumbling (aw, gee, again!), bowling, and an assortment of other sports, but no touch football. Not even flag football. Again, I wonder why since football was a big deal in my high school.

Anyway, I digress. In case, you've forgotten, or are confused, this tale of my rare athleticism happened when I was still a not-so-petite, petite young woman in college. Everyone had traveled an hour or so to a park south of the city. I have no idea anymore where it was, but I do remember the large meadow where we played touch football. Always willing to try almost anything once, I joined in the game. It couldn't be worse than being stuck way out in left field in a softball game.

This having taken place nearly 40 years ago, only one football play sticks in my memory. The one that counts. Our team was in a huddle, listening to our captain explain the play. Blah, blah, blah was what I heard until he said, "Sue, you run down to the goal line. If you're clear, I'll throw it to you. Then you run into the end zone."

I probably gulped as I nodded. Why me? But, there was no time to ask for his rationale. If I were to guess, it would be the element of surprise. Who in his right mind would throw a football at one of the most out-of-shape persons there.

The goal line was far, far away to one—meaning me—who does not care to run. But, hustle I would to save face.  Once the play was in motion, I lumbered as fast as my fat legs could go. No one followed me. Ha!

Near the goal line, I caught my breath as I watched the action near the middle of the field. If anything, I was safe from being run over. I focused on the captain, who was searching for a receiver. He stopped, then threw the ball way up into the air, aimed directly at me. I followed the football across the sky, losing it at one point. I held my arms up as the ball came sailing down. Plop! The ball landed between my hands. I pulled it towards my body, turned, and quickly ran the few feet into the end zone.


I've been participating in the Blogging from A to Z Challenge this month. And, today is the last day. To check out other participants, click here.

Thank you for your visit and interest in reading The View from the Top of the Ladder. Please drop by again.