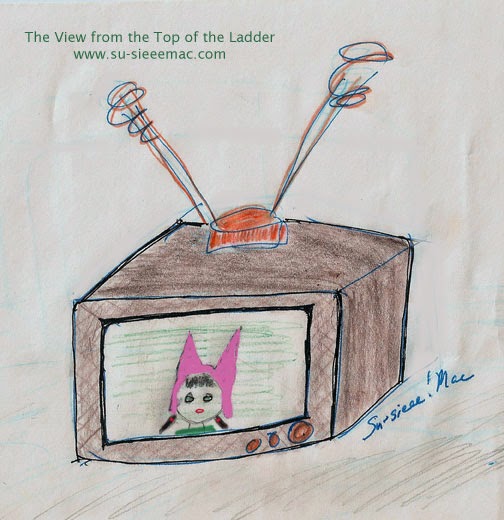 I admit it. I've watched a lot of TV in my life, ever since the Mickey Mouse Club in the 1950s. But, not enough to call myself a tvholic. Oh, sure there are days or nights when I sit in front of the TV and jump from channel to channel during commercials. That's so I don't think about stuff, including writing projects.

These days, I usually fall asleep after an hour of TV, if even that, including on programs that I like. For instance, I rarely make it through Elementary, the show about Holmes and Watson in modern day New York. It could be a genetic trait. The Mama falls asleep in front of the TV after dinner.  Molly the Cat snuggles alongside her and they both snore in front of the TV. Zzzzzzzzzzzzzzzz.

I suppose I could stay awake if I wasn't lying down. "Sit up," says the Husband, waving his hand in front of my face. "I'm awake," I mumble. Barely, of course, but I'm not going to say so. And, maybe I shouldn't close my eyes during a commercial. Zzzzzzzzzzzzzzzzzzz.

This year, I especially enjoy watching Bob's Burgers (love that Louise with her bunny ears), The Big Bang Theory, The Mindy Project, and The Neighbors. Reality shows? Yup, I continue to watch Survivor and The Amazing Race. Lately, I care more about seeing the surroundings as the people do their competitions. What TV shows do you like to watch?

Yawwwwn. Writing about television is putting me to sleep. Time to go make some Zzzzzzzzzzzzz. Perhaps without the television on.