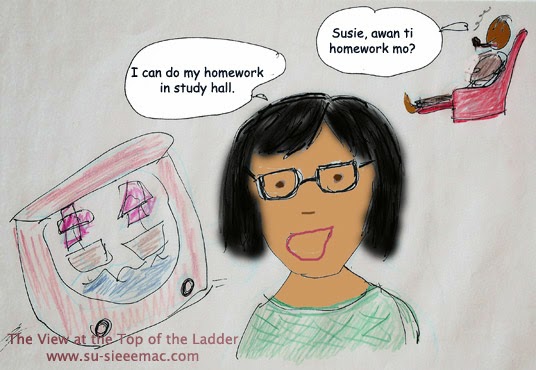 Nearly 35 years ago, a college professor, who hailed from Australia, told me if it weren't for the awkwardness of my writing, I would've got a higher score on my paper. She forgave me for some of my usage and grammar because, according to her, "English is your second language."

For once, I kept my mouth closed rather than enlighten her on how wrong she was.

English is the only language I can read, write, speak, and understand fluently. Proficiently, too, except for the lapses in awkward writing and the proper use of grammar, word choice, and cliches. I'm especially good at forgetting articles (the, a, an, and so on) and getting prepositions mixed up, which, I think is because the Ilocano language has no articles and, as far as I can tell, one preposition.

As I was growing up the parents mostly spoke Ilocano to me while I spoke English to them. I still do that with the Mama, and the Husband finds it very strange. It's really not unusual with immigrant parents and their American-born children. Once, I tried talking to the parents in Ilocano, but they couldn't figure out what I was saying. "Your accent is funny," said the Mama, after she and the Daddy stopped laughing.

When I was a kid, many Filipinos who just immigrated to the U.S. thought I couldn't understand Ilocano. After all, I greeted them in English when they came to visit the Mama and the Daddy. It was inevitable when the parents weren't around that a visitor would say in front of me, but in Ilocano, "My, the daughter is fat!" Another visitor would respond, "She probably can eat a whole pig by herself." And, they would all snicker.

I pretended that I didn't understand, although when I became a teenager, it was very difficult not to put them in their place. But that was okay. I just waited for the moment when the Mama would ask me to serve refreshments. In Ilocano. Then, one of the visitors would ask awkwardly, "She can understand the language."

"Yes," the Mama would say. "She was born in the United States. Even though we speak to her in our language, she can only speak English."

The visitors always cringed and fidgeted.

As I write this I wonder if the Mama may have also overhead the visitors say rude things about me, and that was her way of getting back at them. After all, I rarely saw any visitors who talked "behind" my back come to the house again.