January 19, 2012
Although Mr. L. Gatto Cat was "our" cat for a very brief while, he made quite an impact in all of our lives—the Mama's, the Husband's, and mine. Click here if you would like to first read the prequel to the Tale of Mr. L. Gatto Cat. 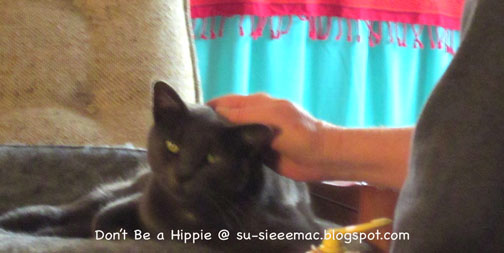 "Hello. My name is Susie. I live up the street. Are you missing a cat?"

It was a warm April evening. The husband and I were walking up and down our block, looking for the house where a young, friendly grey cat might belong. That morning, at breakfast time, the cat had sauntered up to our screen door and mewed as if to say, "Let me in."

"Go away," I said through the screen door. "You don't belong here."

A couple hours later, the husband went to fetch the mail. The  cat came out from under the rose bushes. He petted the cat. On the way back from the mailbox, the husband stopped and petted him again. Yes. I have been told that I married a man who was pure of heart.

Lunch time came. The cat was still hanging out in the front yard. I went out and shooed him away. So I thought.

"The cat acts like it belongs here," I said.

"I wonder where he lives," said the Mama.

Several hours later, the Mama was looking out the screen door at the grey visitor. "The poor cat. He must be hungry."

Sigh. I asked the Husband, "What do you feed cats?"

The cat lapped up a saucer of lactose-free milk, which I placed on the driveway, far away from the front door. The Husband cooed and petted it. I ignored it, while holding the carton of milk. A middle-aged woman and a little boy I'd never seen before walked by. "Hello," I said, hopefully. "Is this your cat?"

No, it was not. She also let me know she had two friendly cats at home. (Like I really cared.) They were visiting a friend, the woman told me. (I haven't seen her since that day). Then she proceeded to ask questions about the Mama and the Brother, both of whom she claimed she knew. (The mama had no clue who she was.)  Later that night, the Husband and I wondered if she had abandoned the cat on our street and had come around to see that it was okay. It's always good to be wary of strangers.

As the cat drank more milk, the Husband and I quietly walked away. I really hoped that with its belly full, it would go away.

After dinner, I opened the front door.

Out the door, the husband and I went. "Come on, cat. Let's find where you live."

He followed us down to the corner, then turned around with us to walk to the other corner. As the husband waited with the cat on the sidewalk, I  knocked at doors. I finally learned names of a couple of neighbors and met one that had moved in recently. I thank the cat for that.

No one looked at me as if I was a lunatic. But, then, a couple of neighbors knew me from the previous Christmas knocking on their door with two bags full of gifts. "Uhm, someone named 'so and so' left these gifts on our front porch by mistake. Are they yours?" No one was missing gifts. That spring evening no one was missing a cat. (FYI: The Brother had left the gifts.)

It was kind of nice walking around with the Husband and a cat on a spring evening. The cat seemed to enjoy scampering alongside us, veering now and then to explore something exciting. At one point, it met one of the feral cats in the neighborhood. I felt like chasing the feral cat away. I didn't like the idea of the young cat living a wild life. He was obviously someone's pet. Not soon after meeting the feral cat, the grey cat melted into the shadows.

As we closed the front door, the Mama asked, "Did you find its home?"

"Where will it sleep?" she asked, worriedly, when we said it disappeared.

"It'll be fine," the Husband said. "It'll find a safe place to sleep."

I was kind of worried, too. The Mama said what was on my mind, "We should've let him in."

The next morning I opened the front door. No meow. I was disappointed.

To be continued on Monday.