December 29, 2011
The parents liked fresh meat and they believed it was cheaper to purchase a pig (or cow or chicken), slaughter and butcher the animal,  and freeze the parts for when you wanted to cook. Because the cost of purchasing a pig was high, the parents often bought it with one or more friends. They didn't bring the pig to the butcher though, as part of the pig-buying event was the camaraderie among the men as they slaughtered and butchered the pig in our backyard. A bottle, or two, of whiskey also figured into the festivity.

Every part of the pig was used. Everything. For instance, the blood was directly drained from the pig into a pot. The right amount of vinegar was added to the blood and it was beat with a hand mixer until it coagulated into a thick pudding. The blood was used for a pork dish known as dinardaraan, which the Filipinos would call Chocolate Meat as they served it to children or non-Filipinos. 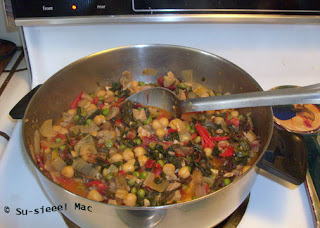 Along with the whiskey, Daddy always  served his compadres a meal of the freshly butchered pig. The rice would be made. Some pieces of pork would go on the makeshift grill in the back yard. And, some chopped pork would be brought into the kitchen for Mama to saute with garbanzo beans, onions, garlic, and pimento (in a jar), and frozen peas (if she had some).

This is one my favorite comfort dishes. Don't ask me what the name is of the dish. I don't know. Even Mama doesn't know the formal name of the dish. At least, not anymore.

It was at one of these butcherings that I made this favorite dish for the first time. Mama was not home, so Daddy called me to the kitchen. He pointed to the meat on the counter,  told me to cook it, and went back outside. There were no if's, and's, but's, or I-don't know-how's with Daddy. So, of course, I prepared it, visualizing how Mama made the dish.

I have no idea how Daddy and his friends liked my first try, whether they actually ate it or chewed it and politely spit it out. Both the parents believed in practice makes perfect. So, Daddy continued to ask me to prepare the dish during these butchering events whenever Mama was not home or she was busy cleaning the pig's guts.

Today, I make this pork and garbanzo bean dish whenever I have a craving for it or when I think Mama would enjoy eating some Filipino food. I know I've done well when she eats all of her meal.