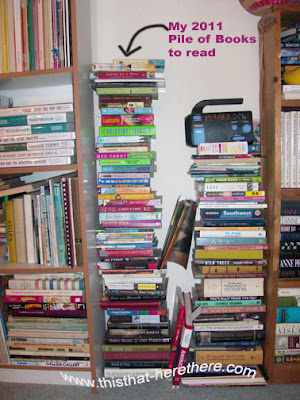 How many book challenges did I sign up for at the beginning of the year?  Whatever was I thinking? Oh, yeah, that I could and would read books for pleasure, at the same time as I'm doing research crazily about 500,000 different professions. hahahahahahahahahahaha.

I started off fine. If you were to look at my book list,  you'd see I've read a dozen so far. C'est la vie.
Just the fact that I piled up all the books that I want to read, rather than scattered throughout our space is a win for me. And, for the husband. Poor guy. Once upon a time he organized and managed a very large warehouse of paper and office supplies for a California state agency. It was very clean and orderly. It in fact rivaled the cleanliness of the Mama's garden. (The woman picks up leaves and sweeps the ground every day that it's not raining. )

What was I talking about? Book challenges, yeah. There is one I did complete: The Cozy Book Challenge.   I said I would read seven to 10 mysteries before the end of September. Every time I finished a mystery, I set it at the top of the stairs, thinking I'd write a brief review about it. hahahahahahahahaha.

But, look, that's what I'm going to do right now. Yep. Maybe I'll get another bookmark for completing it. I wouldn't mind. I actually use the one I got last year. Hey, that's another win for me, since it hasn't yet fallen into some crack never to be seen again.

The Clovis Incident by Pari Noskin Taichert
I bought this book in Albuquerque four years ago because she was a local Albuquerque author. The book is now with a  friend with a request that it eventually come back to me.  I want to read it again. The protagonist is self-employed public relations specialist and she's trying to keep herself from being extra-sensitive to the spiritual world. A visiting Chinese man was killed, but his soul is stuck until the main character can solve the crime. She's in a dilemma of having to solve it because her close friend is accused of murdering him.

The Clue of the Broken Locket by Carolyn Keene. It's your usual Nancy Drew story. She's all confident about what's what, while her two girlfriends, George and Bess, are not. For some reason, Nancy and her friends have driven up to a far away lodge. They keep running into a woman who seems to have a split personality and  who eventually becomes the mystery they need to solve. Nancy's boyfriend, Ned, and his two friends show up to help the girls figure it out.  They're also nincompoops compared to Nancy.

Farewell, Miss Zukas by Jo Dereske. The Miss Zukas series is one of my favorite series. This, alas, is the last tale in the series. Helma Zukas is a public librarian in a town near Seattle. Her sidekick is Ruth, a rabid artist. They are like night and day to each other. It works. The author ties everything up nicely, exactly how I hoped the main characters would end up. In this final adventure, the mystery evolves around Helma's elderly great-aunt and the keepsake in her box that had been stolen. The secondary stress line for Helma is the fact that she finally said "Yes" to the Police Chief's proposal.

Acceptable Loss by Anne Perry. The Monk and Hester series is another favorite series of mine. Monk is a London inspector who strongly believes in justice. He's one of the best detectives on the force even though he lost his memory several years before. Hester, his wife, served as a nurse in the Crimean war and a year or so ago started a safe house for prostitutes and destitute women and children in a bad part of London. It was Hester who helped Monk gradually gain confidence in himself and his abilities again. Through that all, he thought of her as a pain in the neck and so unwomanly, but yet Hester was who he would seek out to sort through his cases. It took several books before Monk realized he loved Hester. In this book, Monk and Hester want to find and arrest the owner of the boat on which orphaned boys were kept and used as play toys for the rich and famous men. Yes, Anne Perry does not shy away from disgusting criminal elements of  Victorian London. Perry also is scared to throw in complications. It is possible that the owner may be the father-in-law of Monk's and Hester's friend.

Fatally Frosted by Jessica Beck. The protagonist is a doughnut store owner and baker. This is the second story in the series, and the third is sitting in the pile. It's not so much that I like the characters as I like the doughnut recipes. I also like that sometimes Beck describes in context how to make doughnuts. Yes, I crave for doughnuts when I read this book. No, I didn't eat any. The mystery to this tale: A hated woman in town was poisoned by one of the baker's doughnuts.

Mr. Monk on the Road by Lee Goldberg. Another protagonist named Monk. This is the same Mr. Monk of the TV series. Mr. Monk and his assistant Natalie are exactly how they were in the TV series. The book series is written in first person from the point of  Natalie. This is  the fourth or fifth book I've read in the series. It's the funniest yet. Mr. Monk, if you don't know him, has many quirks like he has to wipe his hands immediately after shaking a person's hand and that everything must be symmetrical. Natalie keeps him from going over the top. Mr. Monk was a former police detective for the San Francisco Police Department. Because of his quirks, he can't get his job back. But, because he is a dynamite detective, he is hired as a consultant. In this tale, Mr. Monk puts a sleeping pill in his brother's drink and then puts Ambrose in an RV so that the brother can see something of the world. Ambrose, you see, is an agoraphobic. This "kidnapping" is Mr. Monk's birthday present to his brother. Poor Natalie. She has to deal with two crazy brothers and the deaths that keep happening where ever they spend the night.

The Merry Wives of Maggody by Joan Hess. I used to read this series a lot. It stars Chief Arly Hanks of the tiny town of Maggody, Arkansas. The characters are hilarious. Almost everyone in the town are Buchanans and many of them are married to each other. In this tale, the women of Maggody in all their righteous glory have decided to put on a golf tournament to help the poor golf widows. The prize is a very expensive, high powered boat. Of course, all the men of Maggody want the boat, so they've entered the tournament even though they've never played golf. Their wives are furious, so they've signed up for the tournament too. They're also unskilled in the game. Throw in the professional and almost-professional golfers, each with issues, and what do you get. A murder. I confess, I got bored halfway through, so went to the end and read backwards. I guessed right about the events.

Summer of the Big Bachi by Naomi Hirahara. This is a beautifully written tale. It's a voice and style I rarely come across. Hirahara weaves fact and fiction quite well. The main character is Mas, a second generation Japanese American who spent his childhood in Hiroshima, Japan. He was there when the bombs were dropped. The mystery centers around Mas and his two friends who were together at the moment. In present day, someone is trying to find one of those friends, but it turns out that he was the one who died the day of the bombings. So, who is the one impersonating the dead man? Mas must sort it all out though he would rather not.