Off the Shelf Challenge 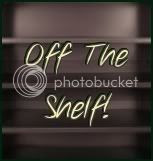 Me thinks I could become a reading-challenge addict. I have forced myself to stop reading about yet another challenge to attempt for no other purpose then claiming at the end of the year that "I done did it!" So, Off the Shelf Challenge is absolutely the last reading challenge that I'll be joining to help motivate me to complete my 2011 Reading List.

The Off the Shelf Challenge is hosted by Dutchie, from Australia who blogs at Bookish Ardour. The motive behind this challenge is to help participants finally read some of the books that have been growing dust (cough, cough) on their shelves. The challenge runs throughout 2011 and you can sign up at anytime. There are seven reading levels from which to choose—Tempted, Trying, Making a Dint, On a Roll, Flying Off, Hoarder, and Buried. FYI: The Buried participants plan to read between 126 and 200 books! For more details of the Off the Shelf Challenge, click here.

I've chosen to participate at the On a Roll level, which involves reading 50 books. To come up with my titles for this challenge I'm not counting the children's books on my list, nor the book I've just finished reading. Hence, here's my list for the Off the Shelf Challenge in general order of the thickness of dust on their covers:

About 10 years or more waiting patiently to be read

Around the World with a King by William N. Armstrong
Six Months in the Sandwich Islands by Isabella L. Bird
The Lives and Times of Archy & Mehitabel by Don Marquis
The Octopus by Frank Norris
America and Americans by John Steinbeck

At least 5 years on the shelves

A Dog's Life by Peter Mayle
Roughing It by Mark Twain 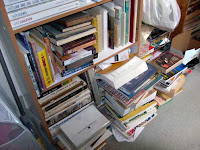 Two to five years sitting around

Bad-Ass Faeries edited by Danielle Ackley-McPhail, L. Jagi Lamplighter, Lee Hillman, and Jeff Lyman
The Demise of Luleta Jones by Mark Allen Boone
Kitchen Confidential: Adventures in the Culinary Underbelly by Anthony Bourdain
Size 14 is Not Fat Either by Meg Cabot
Oscar and Lucinda by Peter Carey
Next by Michael Crichton
My Life in France by Julia Child with Alex Prud'homme
Queen of the Flowers by Kerry Greenwood
I Dreamed I Married Perry Mason by Susan Kandel
The Girl with the Dragon Tattoo by Stieg Larsson
Gentleman Soldier: John Clifford Brown and the Philippine-American War edited, with an introduction by Joseph P. McCallus
Under the Tuscan Sun by Frances Mayes
Cape Perdido by Marcia Muller
The Audacity of Hope by Barack Obama
East of the Gabilans by Marjorie Pierce
Nightcrawlers by Bill Pronzini
Naked Pictures of Famous People by Jon Stewart
America (The Book): A Citizen's Guide to Democracy in Action written and edited by Jon Stewart, Ben Karlin, and David Javerbaum
The Clovis Incident by Pari Noskin Taichert
Jane Austen, A Life by Claire Tomalin
Field Guide to Mysterious Places of the Pacific Coast by Salvatore M. Trento
A Little Too Much Is Enough by Kathleen Tyou
Behold the Many by Lois-Ann Yamanaka

Only The Past Year

Over the Edge of the World: Magellan's Terrifying Circumnavigation of the Globe by Laurence Bergreen
Jane Eyre by Charlotte Bronte
The Lost Symbol by Dan Brown
Daughter of Persia: A Woman's Journey From Her Father's Harem Through the Islamic Revolution by Sattareh Farman Farmaian with Dona Munker
The Dress Lodger by Sheri Holman
Lake Wobegon Days by Garrison Keillor
The Heretic's Daughter by Kathleen Kent
The Kitchen God's Wife by Amy Tan

The Sweetness at the Bottom of the Pie by Alan Bradley
Homicide in Hardcover by Kate Carlisle
Founding Brothers, The Revolutionary Generation by Joseph J. Ellis
Mr. Monk is Cleaned Out by Lee Goldberg
Last Night in Twisted River by John Irving
Locked In by Marcia Muller
At Swim–Two–Birds by Flann O'Brien
Dress Your Family in Corduroy and Denim by David Sedaris
The Guernsey Literary and Potato Peel Pie Society by Mary Ann Shaffer and Annie Barrows
A Night Too Dark by Dana Stabenow
How to Crash a Killer Bash by Penny Warner
Travels with Zenobia, Paris to Albania by Model T Ford, A Journal by Rose Wilder Lane and Helen Dore Boylston, edited by William Holtz 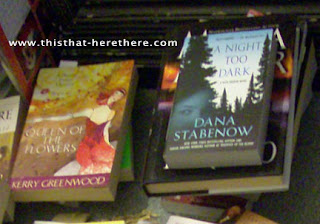