That's what I overheard a friend say to the husband long ago.  He had said it with a goofy smile and a mix of pride, exasperation, and complacency. I had met his mother-in-law. If I believed in such a saying, I would still be running to get far away. 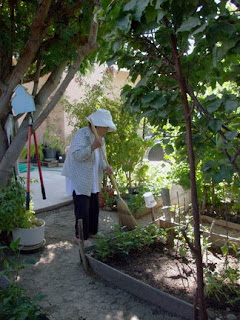 If that saying is true, then one day I would be picking up leaves off the ground, as I gripe about the neighbors and their messy trees and growl at the the wind for carrying the leaves into my yard.

I would also be sweeping the ground everyday, while the dust gathers even deeper inside the house.

On the plus side, if I ended up looking like the mama, I would finally be svelte, which would go better with my petiteness.

Sometimes I wonder if the husband looks at the mama and shudders because he thinks I may end up with some of her more crazy habits.