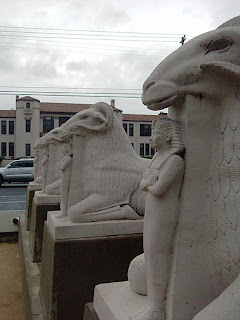 Tomorrow is our third "23rd" adventure. We're talking about heading to the Pinnacles National Monument to hike, to gaze at wildflowers, and, maybe, to see a condor.

These "23rd" outings are the Christmas gifts the husband and I decided to give ourselves last year. Every 23rd of the month, no matter how busy and preoccupied we are, we take off for the day. Just him and me. In January, we took a long, meandering way to the beach. Here's the link, if you'd like to read about the day. Teaser: We got stopped by the coppers.

In February, the husband and I decided to go to the Rosicrucian Egyptian Museum in San Jose. It was a perfect rainy day to be inside checking out ancient relics from a dry region far far away.

The museum looks small but don't let that fool you. It has four galleries full of artifacts. Most were authentic, the rest replicas.   Let's say I was not underwhelmed. We got there in the early afternoon so we had to rush through the last two galleries before the museum closed. You really need a full day to see, read, and take in everything, especially if you're interested in seeing the planetarium show about the  ancient Roman religion known as the Mithraic mysteries.


Upon opening the large golden doors of the museum, we were greeted immediately by a staff member, who looked like someone's grandma. I was kinda disappointed. I expected someone with heavy mascara, wearing a gossamer robe, and looking quite mysterious. When she told us about the exhibits, I was scanning the area for the bathroom so all I heard was "I suggest you start with the gallery of the dead."  But, it didn't register to me what that meant. Later, as we wandered around the exhibits in that gallery, I said to the husband, "This place reminds me of a funeral parlor."

"Because it is," the husband replied.

Until that day, I'd never seen a mummy out of his or her box. I'd rather not see one again. Turns out I can snap away at the recent deceased, but it gave me the willies to photograph a well-kept thousands-year old human mummy. Shiver.

For more information about the Rosicrucian Egyptian Museum, click here. For your pleasure, here are a few photos I did have the guts to take.