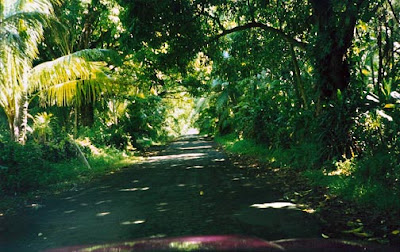 Where is the most romantic destination you have visited?

I've come across this question several times during the last few days, both in print and online. Some publishers say that if I write about it in a minimum number of words (usually between 100 and 200) or less and it gets published, then they would send me money.

Writing about something in so many words is no problem. I may ramble, but I can edit unmercifully when necessary. But coming up with a romantic place, which I assume also means with my honey, well that's a bit more difficult.

Sure, there was that bed-and-breakfast on the Kona Coast, where a guy named "Dude" answered when I called about reservations, which made me wonder if we really should stay there. The same place where I lost the husband on the highway that first night. We were driving back from dinner. It was so dark, we couldn't find the B&B's driveway. After several passes up and down the highway, the husband got out of the car to look more closely for the turn out (turn in?). Instead of following him, I went the other way because that's where I argued was the driveway. Of course, when I turned back, I couldn't find the husband. I drove back and forth in a very obvious first-year marriage panic. I even stopped at a house where the folks were hanging out on their front porch and asked if anyone saw a tall guy with red hair walk by. They were not surprised, which makes me still wonder how many tourists asked them similar questions after sunset.

What was I talking about? Yeah, romantic destinations. I suppose those are magical settings where couples all of a sudden feel lovey-dovey. That is probably why I can't come up with one specific place.

I asked the husband to pick one and he couldn't either. Turns out we both feel that wherever go together is romantic (sappy, I know)—a road trip, hiking a trail, pedaling our bikes through the neighborhood. . . .Even going to the grocery store is a romantic destination for us. After all, what's not lovey-dovey about the husband wheeling the cart as we go up and down the aisles?