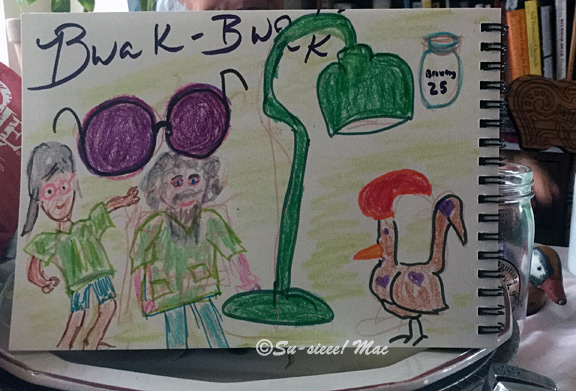 We sang along with Gilroy Ukulele Jam, as they performed "Chickens in the Sky" (think: Ghostriders in the Sky), "Ukelele Girls" (think: Buffalo Girls), and other cool songs. Methinks it's time to learn to play a few ukelele songs. Strum, strum, strum.

We missed the crowing contest, but I still got to crow and bwak-bwak with the ukelele band. Sooo fun!

The weather yesterday was wonderful. No 100s. No 90s. Reasonable 80s for dancing in the street. (By the way we actually got a few minutes of rain today. Yipppieee!)

It was a small town festival, the kind I like. Three or four short blocks with a bunch of crafts booths, a few food vendors, and several people selling their used stuff. We bought a very cool old-fashioned floor lamp for five bwaks and I got a pair of sunglasses, which resembled something Yoko Ono might wear, for 50 cents. Score!

One of our missions that day was to drink a special brew created specifically by local Brewery Twenty Five to commemorate the mission city's 150th Anniversary. And, that we did, out of special-edition jars, one of which the sweet, sentimental Husband bought.

Sorry, no photos to show off the festival. I left the point-and-click at home, which I'm doing a lot more. Don't know how long that'll last.  But, for your pleasure, here are six photos of the nearly full moon that I clicked with the iPad on Saturday night. 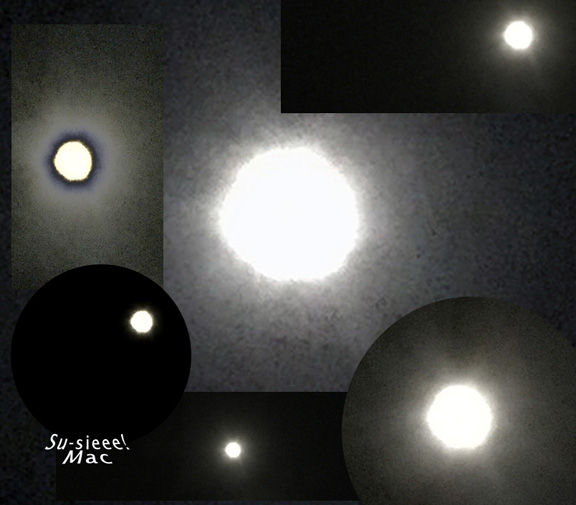 Now, off we go to visit the memes in which I'm participating today: All Seasons and Mosaic Monday. Happy trails to you.