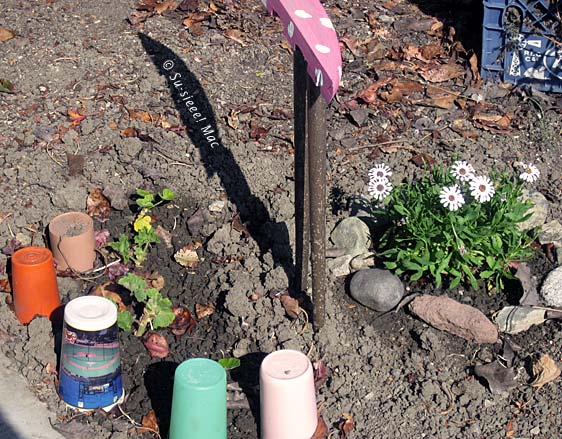 Temperatures are climbing again. The weather dudes say it'll be in the high 90s our way today. As long as there's a breeze, it'll be fine. If not, well, we'll be fine. The Husband, Molly the Cat, and I, that is. I can't speak for anyone else.

Molly Girl and I were out early this morning watering the newly planted flowers. They were only a few so I chose to use the watering can. Only six trips to the faucet, which was far enough away for me to work up a sweat. The exercise also made my knees pop. I like to think that they popped back into place. Dream on.

Sometimes as I trudge about the yard spot watering, I'm reminded of The Mama telling me how her brothers used to carry buckets of water to the field to individually water the plants. I imagined her world of long ago being very hot and dry, and water being very precious. Not so different today, is it?

Several days ago when it was cooler, I stuck two new daisy plants into the ground. The one in the photo is a type of African daisy. Don't you think the flowers look like space aliens? I got the plant at the Farmer's Market. Only four bucks—a deal! I'm thinking of getting three or four more of the space aliens for the backyard.

The little guys on the other side of the pink polka-dot thingy are citronella geraniums, which are cuttings from the vines that used to be near the house. If these cuttings take to their surrounding, I'll be taking photos of overgrown geranium vines in a year or so. The plastic cups around the cuttings are from The Mama's stash of stuff. They're there to let The Husband know to water them when he does the big weekly sousing.