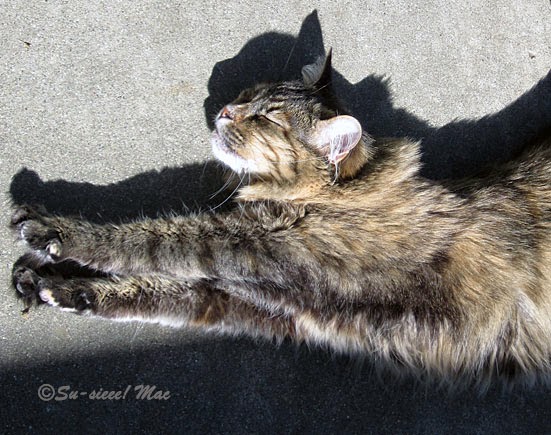 On Sunday, after a whole week of traipsing about every day, my humans lazed about the house. They also did a bit of puttering. Over breakfast, I overheard my humans agreeing that Hero Man will put in new light bulbs in the kitchen. They've been using the kitchen stove light and a flickering light above the sink for several nights.

Late afternoon, Missus Lady thumped down the stairs from the office to fix lunper (lunch + supper). After she stuck the chicken into the toaster oven, she opened the hallway closet and pulled out bags and packages of all sorts of light bulbs. For weeks, Hero Man said to Missus Lady, "We need light bulbs." She answered, "We have a lot in the closet." Said he, "I looked." Said she, "They're there."

Hero Man was surprised to see all the light bulbs in the hallway. "Where were they?" Missus Lady replied, "In the bookcase in the closet." Said he, "All I found was the bag with the large bulbs." Asked she, "Did you search the whole bookcase?"

After Hero Man replaced the burned bulb in one of the outdoor light fixtures, he asked Missus Lady, "Want to watch a movie?" Missus Lady agreed and went back to fixing lunper. A few minutes later, Missus Lady said, "Let's watch the movie tonight. If we watch it now, you won't get around to replacing the light bulbs in the kitchen." Hero Man laughed. "You're right."

My silly humans. I love them.