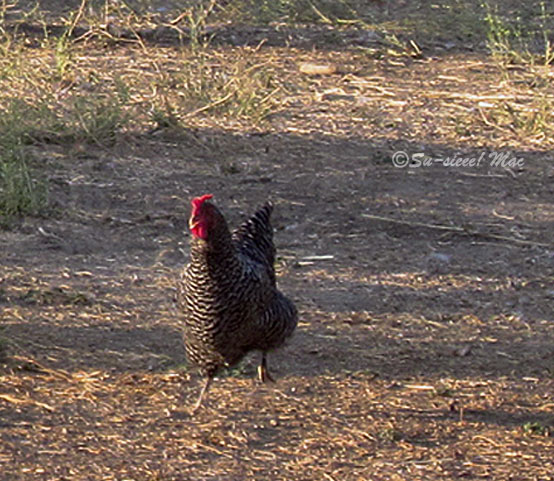 The Daddy and The Mama raised chickens in our backyard, as well as a cow, several goats, a couple of pigs, and a whole bunch of pigeons. All for food. We lived in a house on a decent size lot with a big field behind us, about two miles outside of city limits, so they could. The neighbors on either side of us didn't complain. Not that I knew of.

During the summer, my job was to feed the chickens, which lived in a structure with two small rooms that The Daddy built. There was enough for the chickens to roam free. And wild, so I thought. When I opened the door, it seemed like they were waiting to attack me. Cackle, cackle, cackle. Flutter, flutter of wings. Bwak, bwak, bwak.  It freaked me out. I imagined them pecking me to death.

My method of feeding them was to throw a handful of feed into a far away corner, step in, quickly fill their trough with feed, and get out the door as fast as possible. Shudder.

The other evening we were over at the ranch of our good friends Missus and Mister H who raise free-range chickens and turkeys. I headed over to take photos of the turkeys. The chickens ran towards me. I almost turned back. I stopped. The chickens stopped. They looked at me, and they turned aside.  Mister H told me later that they ignored me because they saw I had no food for them.

So, many, many years later, I think of the chickens from my childhood. They were simply hungry. If anything they were most likely ticked off that I waited so long to feed them.