From the Archives: Molly's Great Adventure 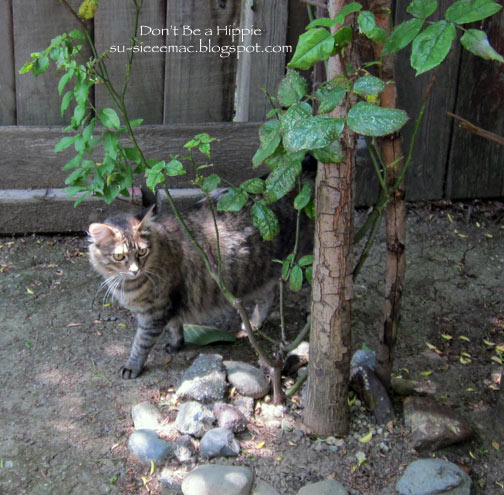 Hi ya! Hey ya! Hope all's well with ya. All is well with us. I'm reaching into my archives for the next several days so I can play catch up around the house. "I'll do it tomorrow." has finally reared itself into today.  Such is retirement. :-) Have fun out there.

Today's post (edited) was first published on April 26, 2012.  It's narrated by Molly the Cat, who had been living with us for over two months when she had her adventure.

"Hey, Kid, your people are looking for you," said Lickity Split, as he speeds by me. I barely get onto the sidewalk when he turns the corner at the end of the street. There is no use following him. All afternoon I was following him. Just as I catch up to him, he jumps onto a fence and climbs over it into the unknown.

I scoot back into my hiding place. Everything was fine and dandy when I first got outside, but it's now dark and cold. I have no idea where I live.

If I was home right now I would be playing with the orange string that the tall hairy human likes to dangle in my face. After awhile the short plump human would put a bowl of food on my tray.  Sigh. Lickity Split said he would show me where to find food if I don't go home tonight. But, will he come back?

"You've got it made, Kid," he said to me when we first met that afternoon. He was the reason I wanted to come out. I wanted to let him know I lived in the house and to ask him what it was like to live outside. I've always lived indoors.

"I don't think you'd like my kind of life," Lickity Split said. "You snooze, you lose." What did he mean?

It's nice living in a house where I'm the only beast. I like being the center of the humans' world. Those three humans are nice, even that tiny one who smells like cigarettes. They pet me. They play with me. They give me water and yummy food. They let me sleep on their beds and couches. They say nice things to me, not like that horrible couple where brother and I lived a few months ago. Sigh.

I wish I was home. I wish Lickity Split hadn't come by the house. I wish I hadn't pushed on the window screen. I wish I didn't jump out of the window. I wish I had thought to mark my path home.

What's that? It sounds like the rattle of the yellow box with my dry food.

"Molly! Molly!" That sounds like the human who feeds me.

"Molly is that you?" Is that really one of my humans?

"Come on, Molly. Let's go home." She puts her hand on me. I resist. She pulls me towards her, dragging part of my body on the ground. Grrrr. That hurts. She's got me. I try to squirm out of her arms, but she holds tighter. She walks quickly across the lawn, calling out, "Hurry, hurry, open the door!"

The door to the house opens. I jump out of her arms and run into a lit room where the TV is blaring. The tiny human sits on the couch while the tall hairy human stands behind me. "Molly! You're home!" They sound very happy.

I am ever so glad  to be home.