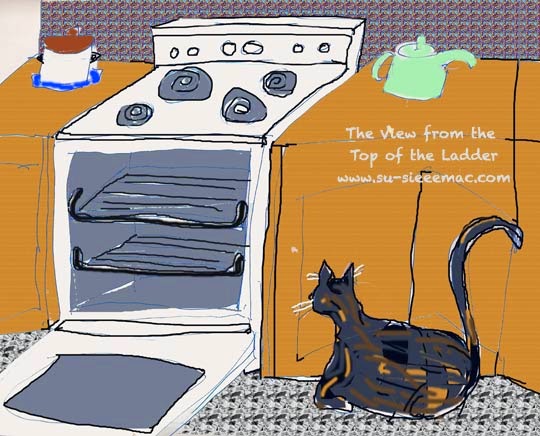 How many dishes can you make out of leftovers? Not separate dishes. More like turning leftovers into something left over for more leftovers.

It was either Monday or Tuesday last week that I made pork ribs by first simmering them with fresh garlic and Cajun spices, then broiling them in a toaster oven. For the BBQ sauce, I mixed leftover homemade pizza sauce, made a few days earlier, with horseradish. Sounds horrible, but it tasted mighty good, so the Husband said.

Even though it was a small slab of ribs, we had leftovers. Not enough for two people though. A couple days later, I added the meat to a concoction of garbanzo beans, peas, linguisa, and leftover sauteed onions and mushrooms. I also threw in a couple of frozen tomatoes. That delectable dish was served with Jasmine rice.

On Saturday, we happened to be standing in front of a Mexican restaurant. Its doors were wide open so we could enjoy yummy smells. Although mouthwatering, we weren't hungry enough to eat. When we did our food shopping, we bought chips, locally made salsa, and cheddar cheese for nachos. My version involved layering the chips, the leftover pork and garbanzo mixture, some salsa, and shredded cheese. The nachos went well with an oat-based beer.

Leftovers? Yup, about a portion's worth.

I stuck the nachos in the fridge, but being that it's two days later, the leftovers will go into the trash can instead of our tummies.  After all, we have leftovers from yesterday's dinner.