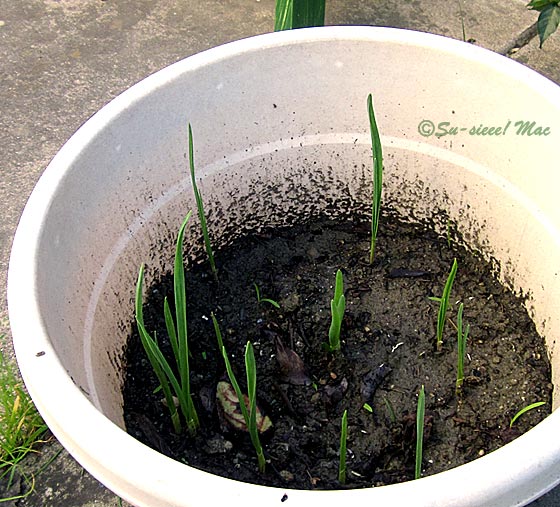 This morning Molly the Cat and I were traipsing about in the backyard when the doorbell rang. Molly inspected the perimeter of the yard, making sure all was well, while I checked how much the garlic had grown in its pot. I'd spied a bit of green yesterday morning just before I stepped inside, thinking I'd look for sure when I went back outside. But I didn't go back outdoors. I let melancholy rob the rest of my day.

This morning I woke up still not wanting to make an effort. What good is that? I told myself. There are roses that need pruning. I visualized myself getting the pruning shears and small saw out from the shed, as well as the rubbing alcohol or hydrogen peroxide from the bathroom to sterilize the equipment. Okay, up and at 'em.

Downstairs, opening the drapes, I noticed the layer of ice on the rooftop next door.  That settled that. I fed Molly her breakfast and made coleslaw. I've found that preparing part or all of our afternoon/ evening meals in the morning, preferably before breakfast, makes life easier when figuring meals is a downright chore.

The coleslaw done, I decided to get some morning sun. Chilled air welcomed Molly and me when I slid open the patio door. Molly blocked the door, hesitant, as if saying, "I don't know about this." I opened the door wider. "I'm going out, Molly."

I checked the pot of garlic. Yippeeee. Green garlic shoots. I heard a man clearing his voice. The next door neighbor was out early, I thought.

Annoyed, I wondered who was visiting so early in the morning. Nine o'clock for surprise visitors is early. I heard the clearing of a male's voice again. What could the neighbor want? As I stepped inside, I saw through the kitchen windows a dark truck parked in front of the house. Oh no! It was our former neighbor, who over the years due to family and health issues had become snarly and negative about everything.

The Husband was upstairs in the bathroom and couldn't hear the doorbell over the bathroom fan. Thank goodness. But if the Husband had, he would've been able to handle our former neighbor with a pleasant "hello, how are you?" and a "thank you for dropping by" while standing at the door.
I stepped back outside.

I didn't want to invite the former neighbor's negativity into the house. I didn't want to hear him repeat his distaste and hate recycled from Fox News, nor have him go on and on about how far our town, state, and country have fallen into hell. Maybe if he inquired about our lives and attempted to carry on a cheerful conversation, or, more importantly, to take steps to get out of his blue funk, then maybe I could put on a happy face and open the door.

Maybe it wasn't the former neighbor. I sighed. I went back inside and walked slowly to the kitchen, looking out the windows. It was him! He was heading back to his truck. He looked towards the house. I quickly went out to the back. Sitting on the bench, I heard him start his truck, take off, turn right at the corner, and drive down the street.

If anything today, he, this former neighbor, was a reminder that I could not, would not, and will not slide into darkness.

Green shoots of garlic popping up through the soil is something amazingly beautiful. That, too, is a reminder.