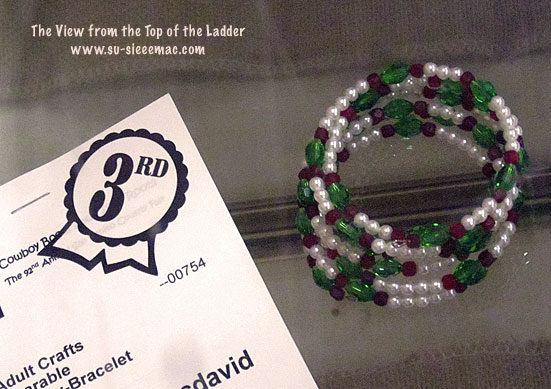 Three days later, I'm ready to brag about my county fair ribbons. For some of them, I don't know if I would've won if there had been a lot more competition. Don't get me wrong, I'm happy for all of them—four blue and one red ribbon in flower arrangements, one blue and one yellow ribbon in photography, and a white ribbon in wearable art. Whooo-hooo!

My most unbelievable win was the blue ribbon for my dry floral arrangement in the Country Road Treasure class. You had to use objects found along the road as containers or accessories. I found a broken piece of PVC pipe with jagged edges along the road while the Husband and I were walking home. It was perfect. When friend Kathy saw my arrangement, she described it as modern minimalism. I was told that the arrangement received a lot of comments. Good or bad, I didn't ask.

You saw my Eiffel Tower martini glass arrangement already. If you haven't, click here.  These were my other flower arrangement entries. 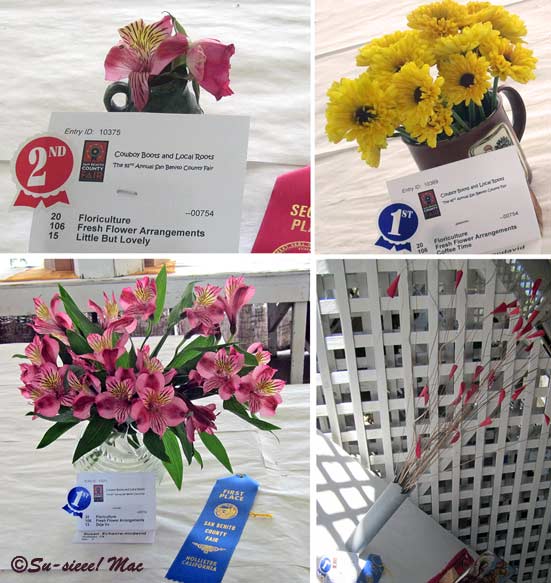 The top row and the one on the left in the second row are fresh flower arrangements. The class for the tiny one is Little & Lovely, which meant it couldn't be 5-inches tall or wide. The class for the yellow flowers in a cup is Coffee Time, and for the flowers in the 1950s pitcher, Deja Vu. That's the Country Road Treasure arrangement in the last photo. I've used those red flowers three years in a row. I might retire them after the fifth year.

When I was a kid, a lot of my classmates entered stuff in the livestock, arts & crafts, and home economics departments, usually as part of FFA, 4-H, art class, home economics, or some other group. I always thought that would be fun. And, yes, I wanted to win a ribbon. 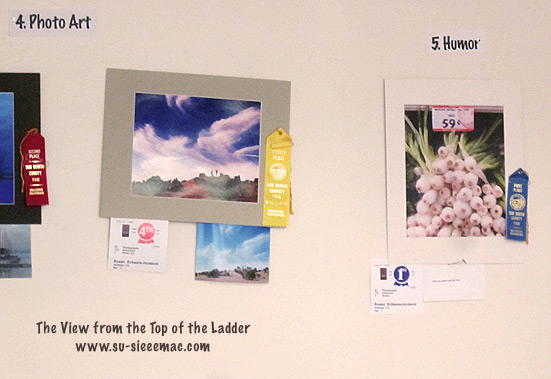 Seven years ago, I decided to enter some photos with the goal of winning one ribbon. On the fourth year, three of my photos finally placed. I think I earned a red, a white, and a green ribbon. I got greedy, I wanted a blue ribbon. (Cue mad scientist laugh.) On the fifth year, I decided to expand my horizons and enter flower arrangements, (whispering here) even though I've never done anything but place flowers in a vase. I won a couple of blue ribbons. Yay! Still, I wanted a blue ribbon from the photography department. Last year, I made that goal and I thought, I'd stop entering stuff. But, I'm hooked. The goal now is to get my entries done way before entry time. Yeah, right.

By the way, I had three firsts at this county fair. One was entering a bracelet, which won a white ribbon. I used the same fake pearls and red and green beads in my Eiffel Tower martini glass flower arrangement. Two, I tasted funnel cake. Yummmmmm. It tastes far better than it looks. And, not at all heavy.  Three, I rode the Ferris Wheel with the Husband. The scariest part was getting out of the seat and safely down on the ground. 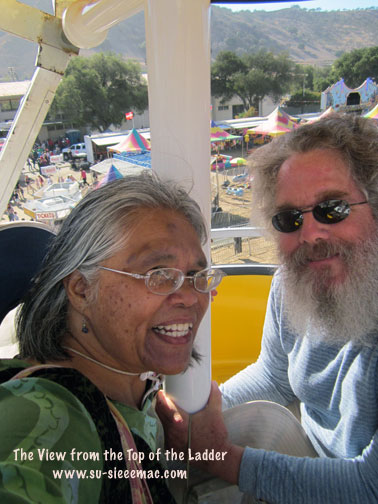