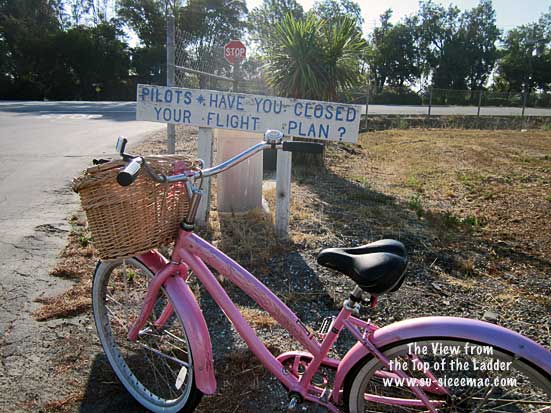 A few weeks ago, a young boy was run over by a bus a couple blocks away from our street. He was riding his bicycle. I don't know what the particulars were. I can only think that both the boy and the driver did not pay attention at the same moment. It was unfortunate. Now, at that spot is a memorial for the boy.

I thought of that event this morning as I rode in the bicycle lane on a main road. As I approached intersections, drivers moved into the bicycle lane so that they could turn right. One driver didn't even signal her intent. She abruptly jumped in front of me. I rang my bell and called out, "You asshole." A walker on the sidewalk said, "You need a bullhorn." Her companion said, "Be careful."

Indeed. It takes two not paying attention at the same moment to have an accident. I don't plan on having one. Nor do I plan on giving up my morning rides.

Today, Tilda-Hilda and I rode for 53 minutes, pedaling about nine-and-a-half miles.