Writing Under the Influence 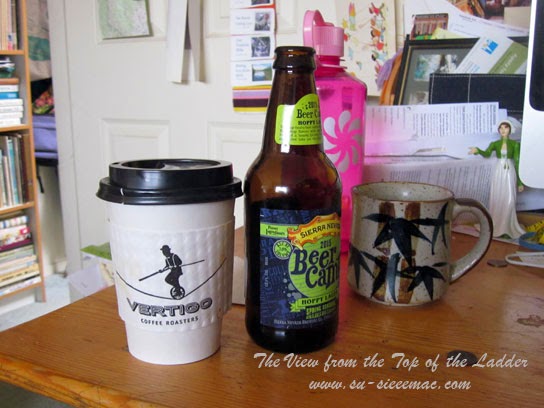 The following was written yesterday afternoon (and edited much later) . . .

This is a first for me. Sipping a beer as I tippy-tap out words on the keyboard.

This, I'm having -- the beer -- right after drinking a small (which in olden times would've been medium) cup of wonderful coffee. I drink coffee now and then, alas. I like the taste of coffee, as well as the thinking that evolves with the caffeine, but this old body of mine can no longer handle daily consumption of the stuff.  Pobrecita. See, even the little Spanish I know gets evoked in the brain cells.

Lately, my morning brew is a cup of boiled water. I'm just not into tea or hot lemon juice right now. For the past week, I've been wanting coffee from Vertigo, a coffeehouse in San Juan Bautista that roasts and grinds coffee beans fresh every day. It's about eight miles, more or less, away. Not far at all, but getting dressed and doing this and that before getting into the car first thing in the morning takes too much time and energy.  By the way, if you're ever in San Juan Bautista, be sure to stop for a cup of Vertigo's brew. The folks there also make some of the best pizza in the area, which they bake in their outdoor pizza oven.

Ah, there I go distracting myself down another path. I have to say, I like the altered state I'm feeling with the caffeine and the beer. Happy buzzzzzzzz. I wonder how authors could write under the influence of alcohol or another mind altering drug besides caffeine. I can understand the drug helping one dig deeper into the caverns of the imagination, but to be able to channel the thoughts down to the fingers over the keyboard. That's something I could not train myself to do. It's just as well. I'm already addicted to potato chips and ice cream.

I heard that F. Scott Fitzgerald wrote while under the influence of alcohol as did Truman Capote and that guy who wrote The Sound and The Fury in which a full-haired Yul Brynner (ooh-la-la!) played someone in the movie version of the novel. William Faulkner! Were there any well-known female authors? Excuse me, while I go over to Google. . . .

Wowza!  Elizabeth Barrett Browning was hooked on opium also known politely as laudanum. The doctors had first prescribed it for her nervous hysteria, which I understand was a state of not getting deliciously satisfying lovemaking. I've never read any of Browning's work. Looks like I will now.

What do you think? Is my writing any more different under the buzzy influence of a strong cup of coffee and one beer than water?