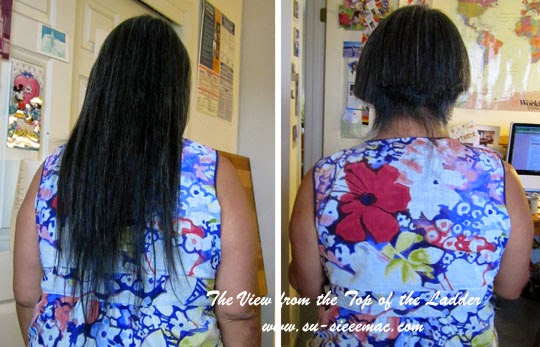 The longest strands of hair were about 17 inches long. That was nearly four years of growth. Definitely the longest I ever grew my hair.

Nearly four years ago, the Husband and I shaved off all our hair. He did his beard as well. That was the second time we did it. Our reason the first time around was to see how long it would grow in a year.  (Here's the link to that story if you're interested.) As for the second time...uhm, I don't recall. But, after a year went by, we wanted to know how long it would be after two years. Then, three years. After which I just thought of growing our hair as our five-year plan.

In the past few months, having long hair became a drag. Depending on how I sat or laid, I'd pull on my hair.  Grooming it daily was a pain. Some days, I pulled it back without combing it. If I went out on those days, I wore a hat. And, washing the hair -- drats!  Too much water to use in the drought we're going through.

Then, over the weekend, my neck, shoulder, and back got crazily bit (don't ask) and every one of those insect bites puffed up. Grrr, the itchiness. That was it. No more long hair. So after I washed my hair and let it air dry,  I sectioned the hair into four bound parts (because I'm donating the hair) and asked the Husband to cut away.

I haven't done anything with my hair yet. I would like to get a nice haircut, but I don't feel like spending $40 or $50 now that I have short hair. And, I think I want to take cello lessons. So, for now, I'll just wear a hat when I go out. 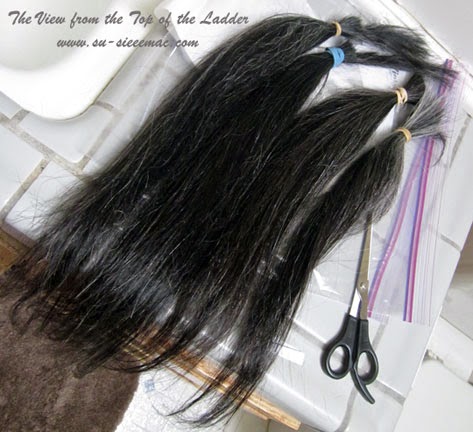