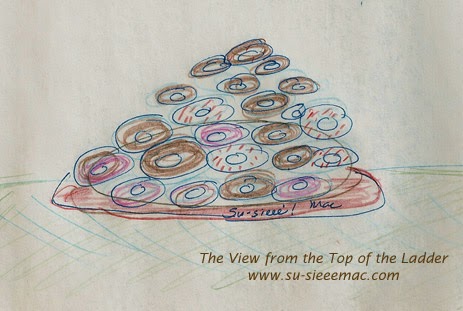 The morning the First Husband died, I had thought about doughnuts.

Frank was 21 days into hospice care, which we elected to do at home. On that 21st day, I woke up feeling strangely relaxed. Unlike the other 20 days, I wanted to sleep a bit longer.

Thump. Frank lightly tapped me on my head. Two times. I felt heartened. He had not been able to move any part of himself for days.  I opened my eyes. He looked at me intensely and clearly. I smiled. He hadn't been this alert since the first few days of Hospice.

"Okay, Frank, since you insist, I'm getting up," I said. I opened the blinds to the living room where we had been sleeping on the sofa bed for the last four months. "It's a beautiful day, Frank."

Our morning ritual began by turning Frank onto his side, then holding a glass of water mixed with a bit of morphine for him to sip from a straw. On day one of hospice, Frank decided to stop eating to bring death on quicker. He, as well as the hospice nurses, were surprised how long it was taking. Next came Frank's sponge bath and the changing of his colostomy bag, followed with a reading from A Course in Miracles. (Today, I think he may had me read from the book more for me than for him.)

"I won't be long," I said, smoothing the blanket over him.

Before entering the bathroom, I glanced back into the living room. Frank looked peaceful lying in bed, with enough sun streaming into the room to bathe him with warmth and light.

While washing my hair, I suddenly had an urge for doughnuts. I imagined driving the few blocks to the shop on the scooter. Easy to find parking that way. I'd be back in no time. Fifteen minutes tops if there happened to be traffic or a long line at the shop. Frank wouldn't know I was gone, I thought. For the past two weeks, he didn't like being separated from me. At first, I thought it was just him being alone, but when I asked a friend to stay with him while I went to the laundromat, I learned differently. I also found out it was difficult for me to leave him. But, that morning, the 21st day of Hospice care, I felt okay about leaving Frank briefly.

"Frank," I said, combing my wet hair, as I walked into the living room. "I'm going to get doughnuts."

His eyes were closed.

He had finally given up life.