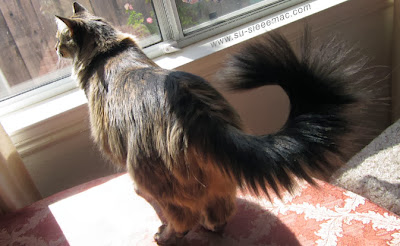 Molly the Cat grew up today. She is now a full-fledged huntress. I wish though that she wouldn't bring her prey into the house to finish it off.

When Molly the Cat came to us, she was an indoor kitty with no experience of being outdoors other than the time her first adopted parents threw her and her brother outside because they couldn't handle the brother's constant vomiting. Poor babies.

Today, Molly the Cat roams the backyard freely and unsupervised. The Mama opens the sliding door after breakfast and Molly pops out. No looking back. Several hours later, Molly saunters through the door. "What's for lunch?" she asks, as she prods me for her meal.

The Husband's goal from the start for Molly was for her to catch her own food so that should anything  happen to her humans, she would be able to fend for herself. So we have waved strings in front of her face to pounce on and thrown balls for her to tackle. The last few months, the Husband and Molly have been playing chase-the-string on the front lawn, sometimes at dusk. That, I think, contributed to Molly's ability to catch the poor tiny yellow finch this morning.

Molly the Cat still doesn't know that she can eat what she catches. Unless what she wanted to do was eat it indoors, which I would not allow her to do today. I ended up burying the little bird next to the baby bird that fell from its nest and Molly quickly fetched and brought inside. The Husband thinks that next time we should put Molly's prey in her dish bowl so that she understands it is edible.  As long as it's not a mouse, I will do that.